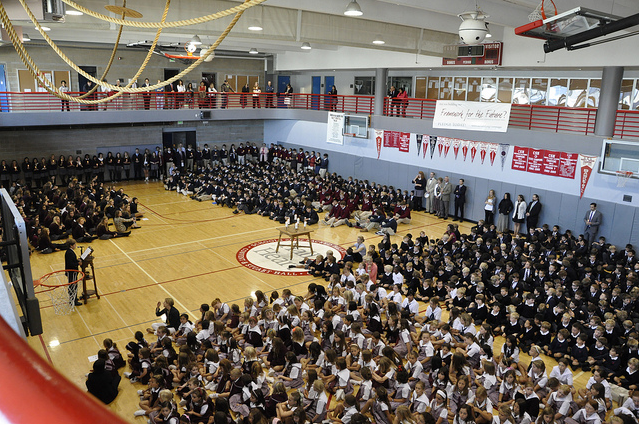 Every year the tradition continues, sophomores graduate to juniors; the previous juniors become seniors. But the completely new students are the freshmen. Coming from over twenty-five different middle schools, Stuart Hall thought it would be nice to get the freshmen guys to know each other better. The new freshmen class met on Wednesday, August 17th for their orientation, participating in activities that would help grow bonds with each other. “We played get the tail from the dragon,” Aaron Tolentino said but, “some of us kind of thought we were going to be playing grab-butt before it was explained.” Though the freshmen success lasted for three days, Wednesday to Friday, the highlight for the freshmen guys was the dinner at Convent with the freshmen girls, which was on the last day of freshmen success.

At Convent, freshmen success also began on Wednesday, August 17th. Some of the activities with the Convent freshmen girls included name memorizing and scavenger hunting. “We also had donuts for breakfast,” said Rachel Fung, which many of the freshmen girls, such as Chrstina Braa, enjoyed. “Arguably for the girls, the highlight of their Freshmen Success was the BBQ at Stuart hall with the guys,” said Sarah Selzer, “I hope we have more gather-ups.”

“First week of school was great,” said Ally Rosen. “It was a lot of fun,” Christina Braa added. “Starting on a high point,” as Jeremy Huynh put it, “we roll into the third week of high school.” Running from class to class and beginning to getting use to their different schedules, many of the freshmen, such as Stefan Stangl, say that they are feeling more at “home” in their new environment at Stuart Hall High School. “I’m beginning to like Stuart Hall more and more” said, Carter Evans, last Thursday in the Columbus Room.

Though everyone seems happy, some of the freshmen have some requests. “I think we should have more dances and more freshmen community,” Julian Eben said excitedly during lunch. “It would be fun to have better Community Program activities!” said Christina Braa. While some freshmen have some requests, others feel snug and wouldn’t want to change anything else. “School’s really fun and I like it the way it is,” said Sarah Selzer. “Yeah, I don’t want to change anything at the moment,” said Charlie O’Connel, “it’s all good.”

Evaluating over these past two weeks, the freshmen seem comfortable, relaxed, and all of them seem to be getting along and working well with each other. “I would say I’m friends with everyone in the class and I’ve gotten to know a lot of them really well now,” Rachel Fung said enthusiastically last Friday. “I think all the guys are really friendly and welcoming,” James Hernandez said, “they’re not mean to anyone at all.” “These last two weeks have been great,” said Gennaro Covelli, “It seems as if everyone has got it going. A lot of my friends are doing other sports, like soccer, football, and cross country, which makes me want to join all of them for some reason.” “These last two weeks have been more fun than I expected,” said Stefan Stangl. While the semester is still young, our freshmen’s enthusiasm is strong and doesn’t seem to be dying down at all.