Outside Lands, Inside Parks 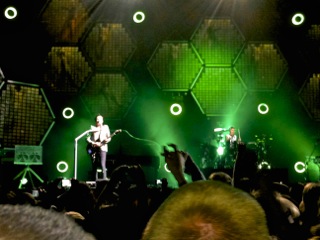 At the Outside Lands Music Festival | Photo by Lucas Chan '14

They biked. Some bused. Others drove. The majority of the crowd simply walked to Golden Gate Park to become part of the huge monster that formed Outside Lands 2011. From August 12th-14th, crowds from all around the Bay Area and from around the world gathered in Golden Gate Park’s Polo Fields drawn by such musical acts as Muse, The Black Keys, and The Shins. Nevertheless, those who were not as musically inclined were welcomed by the many food and wine selections available. For three days, San Francisco’s Golden Gate Park was the place to be for young folk, hipsters, food fanatics, wine eccentrics, and adventure seekers.

This year, Outside Lands Music and Wine festival turned four years old. Named for San Franciscans calling the area, The Outside Lands when it was still developing, the festival plays a huge role in allowing visitors to experience San Franciscan culture. Since OSL is a rather young and new music festival, it showcased many smaller acts such as Best Coast, STRFKR, The Joy Formidable, Foster The People, OK GO, and many more. However, the majority of the festival featured many independent label acts, larger and more popular acts such as Muse, Phish, The Shins, The Black Keys, MGMT, John Fogerty, and The Roots headlining the major stages. During the three days, Golden Gate Park was divided into several stages, the largest being in the Polo Fields and the smallest being the solar powered Panhandle stage.

Outside Lands prides itself on being environmentally friendly while still being able to accommodate the masses of visitors. This year, the festival featured over 50 local eateries ranging from modern Chinese to traditional Latino cuisine. Stationed at every food vender site were small composting and recycling stands that attempted to teach people how to be environmentally friendly. Pervading the food stands, many interactive stands such as Intel’s Visual Life Experience and Serve’s Barcade allowed fans to enjoy fun and exciting activities such as playing video games, watching sports events, and broadcasting on the radio. OSL had something to do for everyone.

Overall, Outside Land’s lineup and activities were rather satisfying and paved the way for the festival to become a world-class event alongside Coachella and Lollaplalooza. Outside Lands continues to emulate many other gatherings, while remaining unique to its core values of being eco-friendly. Every year OSL seems to be growing at a steady rate. Eventually, San Francisco will have the most exciting and unique festival in the world.