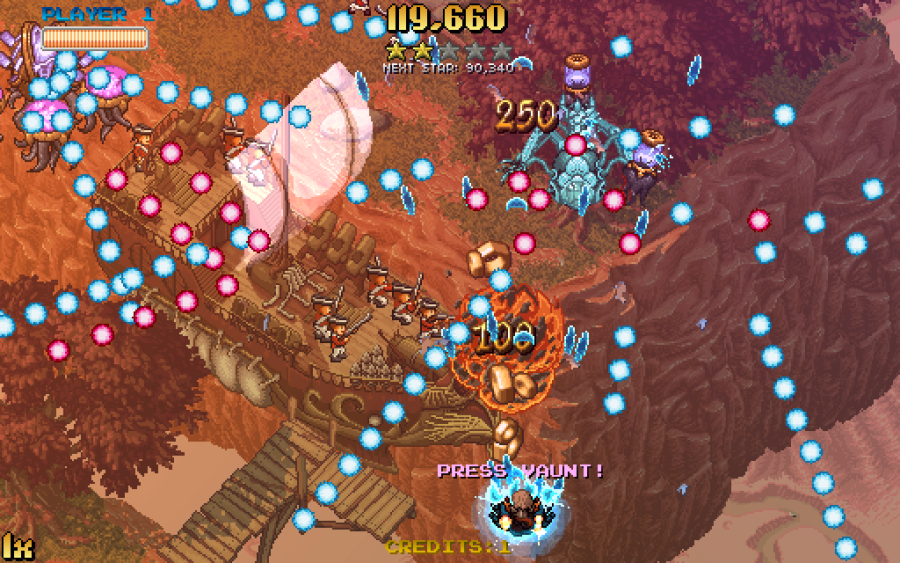 The PC/Mac gaming world grinds to a halt whenever Steam has one of its legendary sales, and for good reason. $25 bought me Left 4 Dead 2, Dragon Age: Origins Ultimate Edition, Jamestown, Alien Breed 2, Splinter Cell: Chaos Theory and a cool hat. The first thing I installed was Jamestown (mostly because it was the smallest at 84 megabytes). Playing this indie shoot-em-up immediately, I came to be shocked at its outstanding quality and polish.

The year is 1619, Sir Walter Raleigh escapes from the Tower of London with John Smith to British Colonial Mars, strapping on a flying suit of armor, he leads an attack on the colony of Jamestown, which has long since been occupied by the traitorous tentacled martians of Roanoke loyal to the Spanish.

As you can see, Jamestown is a weird game. Its unbridled weirdness gives the game an irresistible charm, and as a result we are left with a gleeful smile throughout the entire presentation. From the hyper-detailed backgrounds reminiscent of both classic 16-bit titles and Scott Pilgrim vs. The World, to the static and silly introductory panels, it is clear that much love has been poured into the game, and Jamestown becomes awesome because of that.

Shoot-em-ups, currently the 7th most popular genre of game in Japan, are relegated to only a tiny niche market here in the west. As parts of a dying genre, such games are unappealing to American tastes because of their unrefined graphics, frenetic pace, simplistic gameplay and masochistic difficulty. Needless to say, Jamestown has much to overcome to become appealing to the western market.

Fortunately, Jamestown succeeds with more than flying colors in being accessible to the Western market. For one, the game moves at a much more sane pace than Japanese shooters. While the game is still frantic,  your ship and enemies move at a pace that the human mind can comprehend, and as a result, we have a shooter with a much gentler difficulty curve.

Jamestown makes its primary innovation in its “Vaunt” system, which allows a player to collect dropped coins from enemies to fill up a “Vaunt-Gauge”, which, when deployed with the spacebar (or center mouse or X button), grants seconds of invincibility and increased damage and score until the gauge is depleted (the gauge can be refilled mid-vaunt by collecting more coins). Its a system that affords the game a considerable level of strategic depth and skill. Tactically deploying vaunts and extending time becomes an integral part of the game’s appeal, making Jamestown unique in what might otherwise be a mindless style of gameplay.

Cooperative play is another one of the game’s greatest strengths. Instead of sharing a limited pool of lives and credits, the entire party can be brought from the brink of failure as long as one person survives to the end of a level. This significantly reduces the pressure on each of the players and makes the penalty for death bearable. Furthermore, a selection of four ships feature abilities and limitations that complement each other, making for effective cooperative play requiring actual teamwork. Thus, it is unfortunate that multiplayer is offline only and requires additional mice and controllers to experience in its fullest.

That said, Jamestown is still a very difficult and skill based game. Patterns must be recognized and reacted to accordingly and evasion, while slower paced than Eastern shooters, is still a challenging task. You will die a lot in the game and a limited amount of credits guarantees that the player will need to take multiple tries to succeed. Limits on progression at certain difficulties effectively bolster a player’s skill and usher them into higher difficulties.

Perhaps Jamestown’s strongest aspect is its inspired artistic design. Highly detailed hand-drawn characters and adorable enemy ships showcase the graphical prowess that can be achieved when a 16-bit aesthetic is attempted with modern hardware. Steampunk trappings solidify the silly martian-colonial story. A multitude of resolution settings gives the player the option of either playing at pixel-perfect ratio or at a highly-stretched fullscreen. Animations feature a multitude of frames and run smoothly on dated hardware. I ran the game on a Intel HD Graphics card and was still able to play at a pixel-perfect ratio.

From the auditory side, Jamestown is also a triumph. An orchestral-rock soundtrack is exceedingly rare for an indie title. Sound effects are “just right”, adding a sense of satisfaction to collecting dropped coins and scoring direct hits on enemies.

Jamestown’s greatest challenge was remaining relevant in an age where 2D-top-down shooters are considered irrelevant. From the screenshots, one would fairly believe that the game offers nothing different from the legions of crappy free Flash games out there on sites like addictinggames or Kongregate. It is through creativity and innovation that Jamestown beats these insurmountable odds to become relevant in the western market and acquire the respectable score of 4/5.