The Value of #OccupyWallStreet 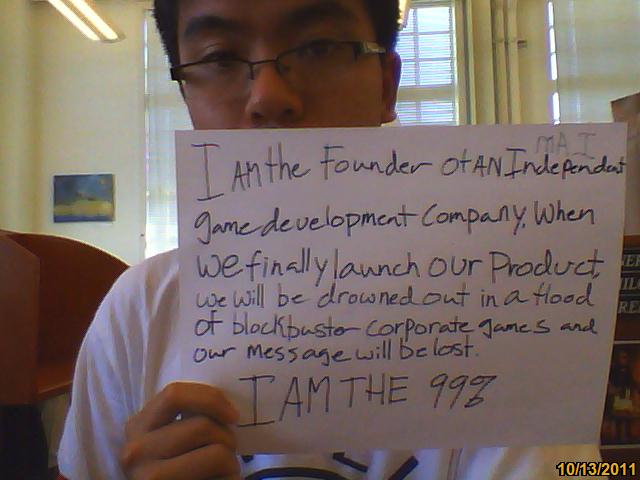 30 Days, 800 people arrested, their deplorable crime: wearing masks.
In our time, power and influence oftentimes depends on wealth. Corporations are treated by governments as tantamount to citizens and our artistic culture has “evolved” into an “industry”. The monumental cost of locally grown food relegates the poor to lethal diets of comparatively inexpensive processed fast-foods and the encroachment of corporations on music and gaming drowns out independent, self-funded visionaries. As the objects of American profiteering, citizens will not stand for injustice. Thus hundreds of thousands of disaffected people from every imaginable political, socioeconomic and cultural background gathered to take back justice in Occupy Wall Street, the largest anti-capitalist movement since the Battle of Seattle.

The hacker collective Anonymous, whom which I admire greatly, has backed the movement strongly. In an official statement on their blog, they wrote:
Through a direct democratic process, we have come together as individuals and crafted these principles of solidarity, which are points of unity that include but are not limited to:
§ Engaging in direct and transparent participatory democracy;
§ Exercising personal and collective responsibility;
§ Recognizing individuals’ inherent privilege and the influence it has on all interactions;
§ Empowering one another against all forms of oppression;
§ Redefining how labor is valued;
§ The sanctity of individual privacy;
§ The belief that education is human right; and
§ Endeavoring to practice and support wide application of open source.
We are daring to imagine a new socio-political and economic alternative that offers greater possibility of equality.  We are consolidating the other proposed principles of solidarity, after which demands will follow.
It is becoming increasingly clear that Occupy Wall Street is maturing into what could possibly be the left’s response to the Tea Party. Ivy League professors came to New York’s Zuccotti Park in droves to give free lectures to protestors, while soup tents, medical bays and PR stations were established in the movement’s encampment. Renowned anti-capitalist Noam Chomsky wrote: “Anyone with eyes open knows that the gangsterism of Wall Street — financial institutions generally — has caused severe damage to the people of the United States (and the world)… They also carry out these ugly activities with almost complete impunity — not only too big to fail, but also ‘too big to jail.’”.

The movement has gained momentum and similar protests have manifested in 1500 cities worldwide. On the home front, an Occupy San Francisco movement has appeared, a major encampment arising outside of the Federal Building. Hundreds were arrested, their crime: simply trespassing and wearing masks. Their refusal to provide the media the imagery of broken glass and mass chaos was a cause of contention.

Some have drawn ideological parallels between Occupy Wall Street and 1999’s Battle of Seattle. The primary difference between the two is that today’s movement has targeted a formerly-trustworthy institution responsible for outsourcing slavery, vast economic disparities and the disease of poverty. 1999’s protesters targeted a WTO summit lasting for only a week, which meant that their message and presence would only exist for a week before being lost to the insatiable maws of time. In targeting a long-standing institution, occupants hope that their message will not be eternal, and that they can bring a light of hope to thousands of disaffected people harmed by the unrestrained greed that capitalism is engineered to create.

This article expresses the opinion of its writer alone. It does not necessarily reflect the views of Stuart Hall High School or the round table as a whole.