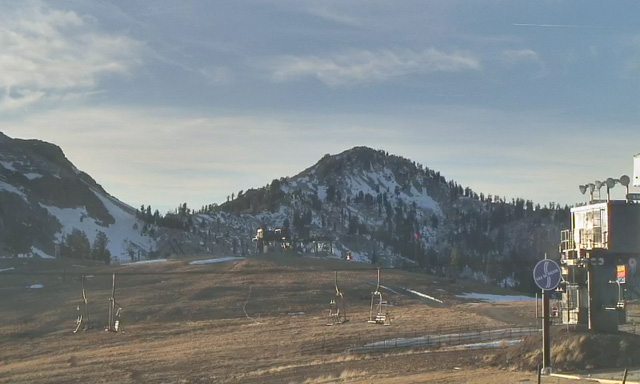 We’ve been getting our share of chilly air here in the city, but the December and January dry spell hasn’t helped much in the Tahoe snow situation. The high temperatures in Squaw Valley were warmer than usual during the month of January — not exactly a good sign for a mountain where sustainable snow fell only once during the month. Squaw Valley, a mega-resort with deep pockets has kept the snow blowers going for all the suckers and bunny slopers. However, over 75 percent of the runs available at the major ski resorts are closed due to the lack of snow. The reason for the shortage of snow is due to a strong dry Eastern wind that has been moving across Northern California. This weather pattern has situated itself over California for the past couple of months, which in turn has caused a long dry spell in the Sierras.

Two weekends ago the weather reports started to look better with predictions of  Tahoe snow. Mid month the high Sierras finally received a fair amount of snow. The storm dumped a total snowfall of 46 inches. Due to this recent snowfall, major resorts started to re-open more of their runs and are beginning to draw in more skiers and snowboarders to the slopes. There are big expectations for another storm to descend upon the Tahoe area but so far the predictions aren’t good for February.  Maybe it’s a year for hiking and not skiing?