Macklemore and Ryan Lewis at The Fillmore 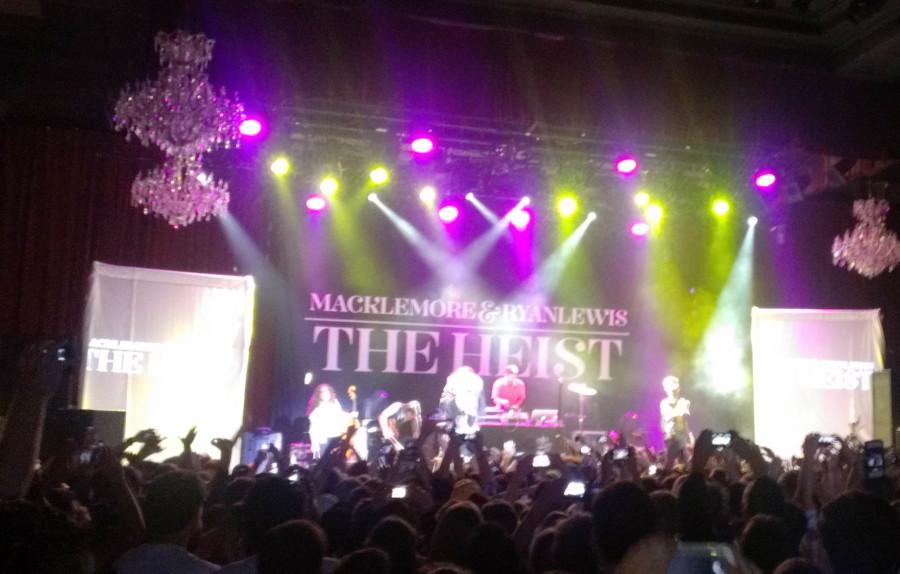 I went to my first concert at the Fillmore. It was an experience I will remember forever. Seeing a concert in such a historic venue was exciting, but even more so was the artist I was seeing.

The opening acts of Xperience and Dee-1 were good, but when it was time for Macklemore to come out everyone went insane. People were jumping up and down, screaming their heads off, as he came running out onto the stage.

He went through many songs on the Heist before performing his most controversial song, “Same Love.” As a lead-up to the song, he told a story about his uncles, and their struggle to get married. The whole crowd knew what was coming next as he brought Mary Lambert, a singer from Seattle, out to sing the chorus about equality in rights and marriage for the gay and lesbian community. The crowd went nuts throughout the whole song, singing along to the words in a moving fight song for equal rights.

The next songs he performed were all amazing, including “Thrift Shop” and “Starting Over,” a song about drug addiction. Then, he announced that the show was over, and everyone walked off-stage. Even though it was a Sunday night at 10:30 pm, with the concert having been going on for hours, he had left too soon. Quickly, a chant for an encore rang throughout the crowd, but for about 3 minutes nothing happened. Then, slowly, the musicians walked back onstage and started playing the beat to “And We Danced.” The crowd went crazy again as Macklemore leapt back onstage to perform for another 45 minutes.

After the concert was officially over, we ran into Dee-1 on our way out, talked to him for a while and got a picture. He was just hanging out at the bar, completely laid back, talking to fans in a relaxed manner. It was nice to see an artist who didn’t think he was too big for the fans.

As we left the concert, it was pouring rain, but the rain felt great. I hadn’t realized how hot it was inside until I got outside on the street. Fans were pouring out of the theater joyful and laughing, and everyone was having a good time. I walked over to my car, opened the door, and promptly told my dad about one of the greatest days of my life.