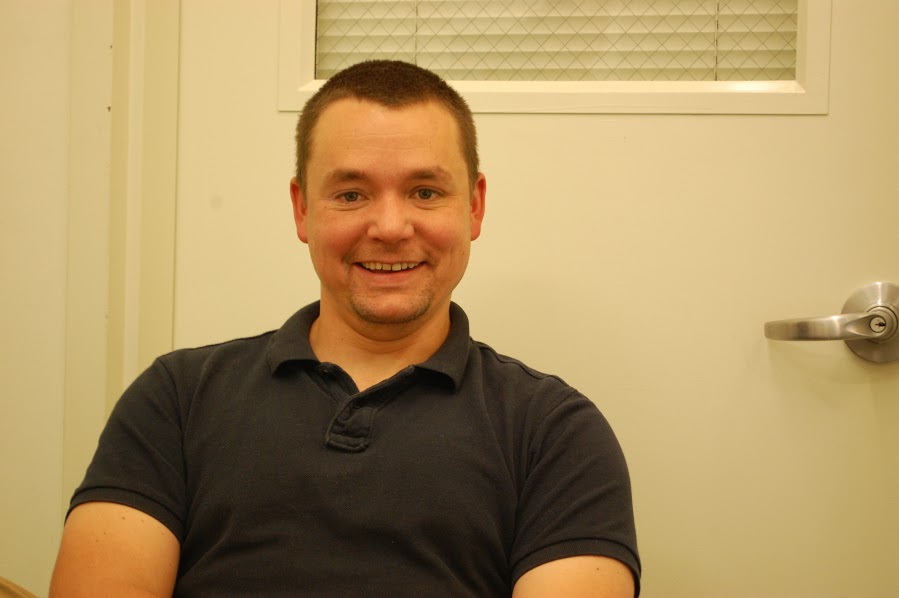 
“I teach, I coach, and then I race home to hold my daughter.” This is how Mr. Helms described his life. Mr. Helms teaches life sciences to freshmen, juniors, and seniors here at Stuart Hall. His classroom, on the second floor, doubles as a learning space and social club (during non-class hours). His classes are always eventful and usually conclude with his students laughing uncontrollably. But there is a serious side to Mr. Helms’s classes. His teaching style is a unique one as he runs a form of inverted classroom. Students watch video podcasts of Mr. Helms explaining concepts for homework and then perform labs or write papers during classroom time. William Kahn ‘18 says, “Besides making the whole class laugh, I would say that Mr. Helms’s teaching style allows for questions to be asked easily and I always know I will get an answer.”

Before Mr. Helms came to The Hall he spent his days patrolling the U.S.-Mexico Maritime Border. While there, he worked in tactical law enforcement for the United States Coast Guard. After he served at the border, Mr. Helms was transferred to Alameda where he worked in Military Intelligence. Mr. Helms’s career with the Coast Guard would have required him to move every couple of years, so he and his wife decided that in order to put down roots and start a family, he would need to leave the Coast Guard. His departure from the Coast Guard is what brought him here to Pine and Octavia. “Although I have always had a fondness for teachers and coaches in my past, I never seriously thought about becoming one myself. However, as soon as the opportunity presented itself in my life, it felt like falling in love all over again.” Working in San Francisco, Mr. Helms spends a lot of his time in the Mission district serving at his church. He then hustles home to his house in Pacifica to see his baby daughter.

Mr. Helms hopes to someday return to the Oregon Coast and open a pastry shop that uses molecular gastronomic with his wife, who has a PhD in chemistry. Oregon is where Mr. Helms grew up. He was raised by his father and lived a rather “normal” childhood. “I fished, played sports, and dated the woman I would eventually marry” recounts Mr. Helms. He was Student Body President and participated in basketball, cross-country, and Track & Field before graduating and attending the Coast Guard Academy. Mr. Helms has quite a story to tell and we hope he continues to write his story here at The Hall.