The Quest For A Perfect Season

The Hall Looks to Capture it's 1st Football Championship 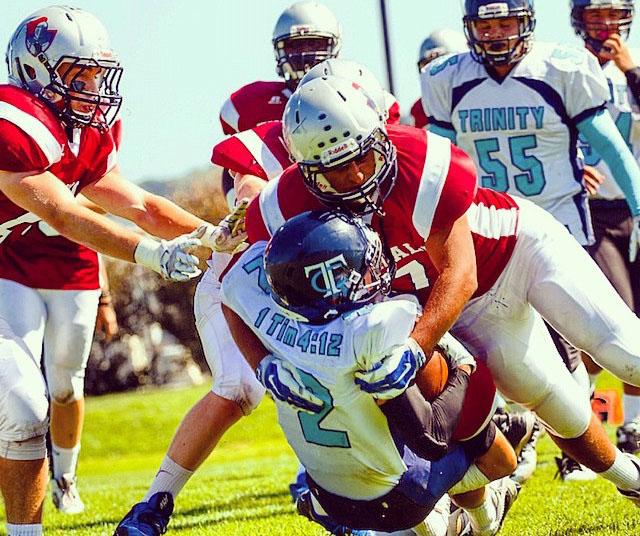 “Down, set, hike, hike!” This is the sound of football season starting. The Stuart Hall football team looks for dominance in the Mission Trails League. Stuart Hall is coming off of a 7-1 season with the only loss coming in our Homecoming game versus Trinity Christian, the eventual champions of our league. Stuart Hall’s team looks even better than it did last year with only two starters lost to graduation, seven incoming freshmen, second year captain Omid Ravanfar ‘16, as well as new captains Malik Hale ‘16, Evan Kim ‘16, and Alex McDonald ‘17. The football team looks as if it may be an unstoppable force.

Last year ,the Stuart Hall football team outscored all of their opponents by a combined score of 386-211, however the offense is looking even better this year. With two returning first team all leaguers in Malik Hale ‘16 (halfback/receiver) and sophomore Jorim Powell ‘18 (quarterback/halfback) and every other starter returning except right guard Liam Campbell ‘15 who graduated, this offense is now the most high octane offense that The Hall has ever seen.

If you want to come catch Stuart Hall annihilate their opponents on the gridiron, come get your spooky on for their Homecoming game, on Halloween, at Boxer Stadium in San Francisco. Other important dates include: the toughest game of the season and unofficial championship game vs Trinity Christian on September 19th in Monterey. The Stuart Hall Football team is going to put in their best season yet and finally get our schools first football championship.