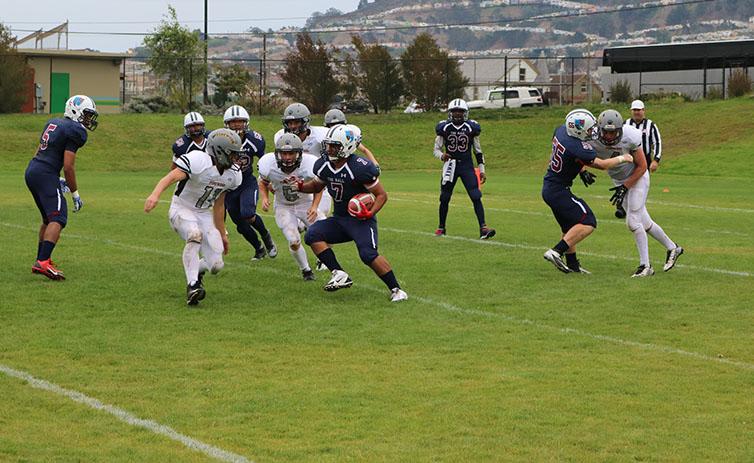 Omid Ravanfar carries the ball in a game at Boxer Stadium earlier this year.

Some people say that football season does not really start until week two. The Hall definitely believes this, by the way they played in Monterey by annihilating Trinity Christian. This win came as payback for Trinity Christian handing Stuart Hall their only loss of the season. As Head Coach Richard Robinson told his players in the first practice since the game, “This is the most complete game that the Hall has ever played.”

On offense, The Hall was firing on all cylinders on its way to a 48-8 win. However, the team needs to clean up mental mistakes where three touchdowns were called back on penalties. Center Evan Kim ‘16 has really organized the offensive line well, showcased by the fact that quarterback Jorim Powell ‘18 was sacked zero times. Yet again, Jorim Powell and running back Malik Hale ‘16 carried the offense. Jorim had 252 all purpose yards and 3 touchdowns and Malik had 163 rushing yards and 3 rushing touchdowns.

The Hall isn’t the “Legion of Boom” on defense, but they should be known as the “Legion of Zoom.” Stuart Hall only allowed eight points with zero points being allowed in the second half. Stuart Hall’s speed continuously tired out Trinity’s offense and they was not able to even get the smallest drive going. Linebacker Alex McDonald ‘17 finished the game with 9 tackles and was a menace to Trinity Christian’s run game and the rest of the defense was just as terrifying.

Stuart Hall’s Special Teams unit locked down on kickoffs as they fired on all cylinders, enroute to the win. On kickoffs, The Hall was dominant and did not allow Trinity to return a kick of over 5 yards all game. The Hall had some big kick returns with Alex MacDonald ‘17 returning a kick for a touchdown to open up the second half. The Hall did not get the chance to return any punts and only punted once allowing, no return.

Come out to Stuart Hall’s Homecoming game this weekend at 1 o’clock at Boxer Stadium against East Palo Alto High School.