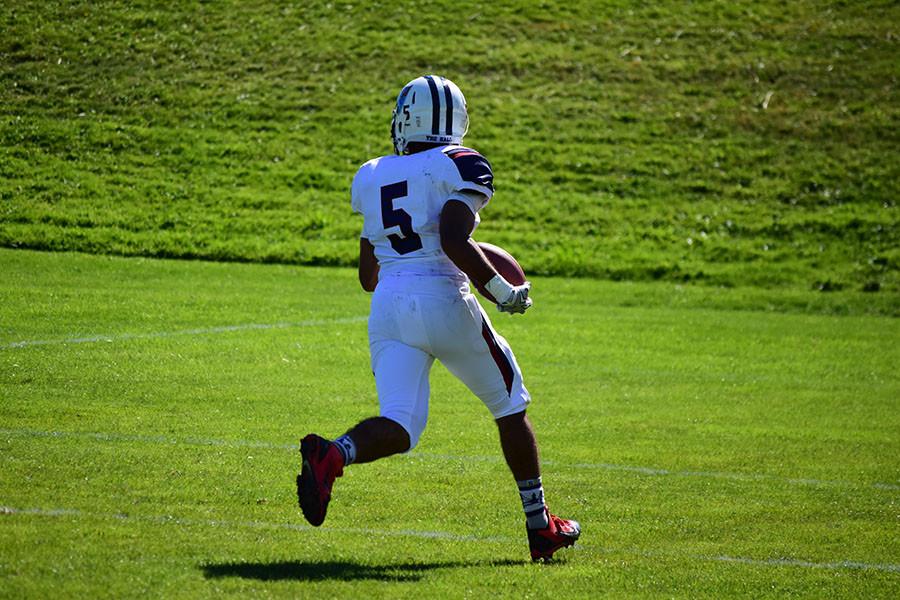 Malik Hale scores a touchdown at a game earlier in the year, at Boxer Stadium.

The Stuart Hall football team lost a tough non-conference game against powerhouse Anderson Valley, bringing their overall record to 5-1. The game was a tough fought game with a final score of 32-24. While their undefeated streak of ten games continuing from last year is over, they still can clinch the league championship with a win against Alma Heights this weekend. With the win, Anderson Valley is now 7-1 on their season. The two teams are now 2-2 against each other.

The offense was very inefficient, especially in the first half after being blanked by a strong Anderson Valley defense. There were many mistakes that contributed to the offense’s failure, including costly interceptions thrown by quarterback Jorim Powell and the lack of push from the offensive line. Anderson Valley’s defense gave constant pressure to the run and pass game. The receivers and running backs were invisible with several dropped passes and ineffective runs on the day. The offense went on a small run in the second half, however, after being down 6-0 and suffering key injuries to Malik Hale, Omid Ravanfar, Colin Carr, and Alex McDonald, the offense could not score against a brutal Anderson Valley defense.

Special teams had a terrible game including a failed punt attempt, a punt return for a touchdown, and a successful fake punt that ended in a touchdown for Anderson Valley. The kick/punt return team was also not admirable rounding out a terrible day for the Stuart Hall special teams unit.

Stuart Hall easily had their worst game of the season. It was a hard fought game until the end, however, they suffered some brutish injuries to star players when their services were needed most. The playing conditions were very bad, with several complaints made about the field and the quality of the surface. There were some questionable calls made by the referees, including an astonishing amount of facemask calls.
Stuart Hall looks to bounce back this weekend against Alma Heights on Saturday at 1:00PM.