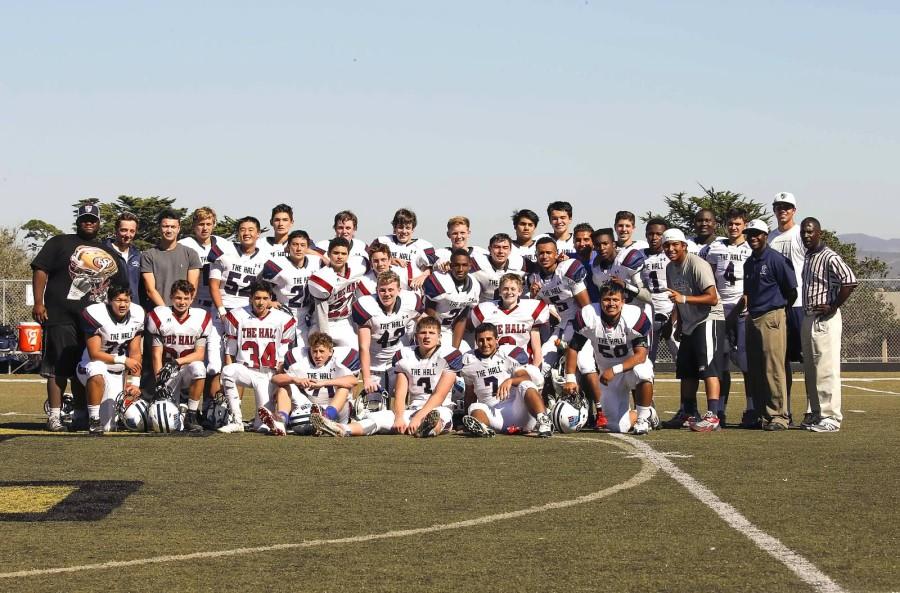 Congrats to the Hall football on their first ever league championship!

The Hall secured a championship for the Mission Trails Athletic league with a 52-6 dismantling of Alma Heights Christian Academy. We had a fitting tribute to the seniors where all of them made the complete starting lineup on offense, defense, and special teams to start the game. The highlight of the game came on the second play from scrimmage with a 50 yard touchdown catch and run by Alex (Money) Dugan ’16. He unleashed a spin move worthy of the NFL that made the first defender miss and outran the rest of the defense to score arguably the best receiving touchdown in this school’s history.

This week for the grades I will be doing full season grades instead of just from the weekly game.

The Hall was almost unstoppable on all offensive fronts this year, but was especially dominant when running the ball. The running game averaged 299 yards per game led by quarterback Jorim Powell ‘18, running back Malik Hale ‘16 , and fullback Omid Ravanfar ‘16 who all averaged more than 10 yards per rush. The one area where offense did not completely dominate was our quarterback Jorim Powell’s completion percentage which was around 50 percent. That being said, the offense will look to reload next year because 5 of the current starters were seniors and will need to be replaced in this upcoming season.

The Hall was almost as dominant on defense as on offense and if it wasn’t for a bad habit of missed tackles, the defense would have gotten a better grade. Pressuring the opposing quarterback was The Hall’s specialty with a total of 52 total sacks in only 7 games which led to an average of 7.4 sacks per game. The leader of the defensive line was Colin Carr ‘16 who totaled 11 sacks and 5 hurries.

Linebacker Omid Ravanfar ‘16 and defensive tackle Rex Walters ‘17 led the team with 34 and 31 tackles respectively. Just like the offense the defense will have to reload with three starters being lost to graduation.

Special teams was consistently the best special teams unit on the field with 5 kick return touchdowns, the highlight being a reverse handoff by Jorim Powell ‘18 to Malik Hale ‘16 that led to a full field 80 yard touchdown to lead off the second half of a game. The Hall’s coverage team on kickoff was usually good at pinning the opposing team inside their 20 yard line but did allow a kick return touchdown and a few long returns. Special teams should be fine in terms of not losing talent with only 1 starter being lost to graduation.