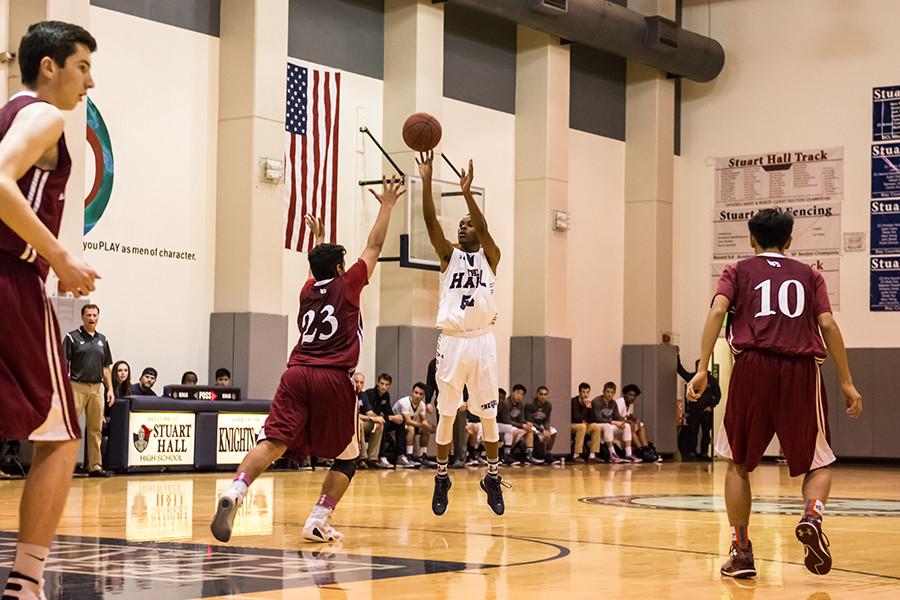 Darna Stewart pulls up for a jumpshot against Lowell.

As winter rolls around again, students are starting, once again, to head down to The Dungeon. Intramurals have come and gone, and it is time for the real thing. With basketball tryouts and a couple of games behind us, it is time to take a look at how the three teams are shaping up in preparation for the upcoming months.

Varsity has won its first seven  games thus far, with seniors Axavier Byrd and Zeke Crawford taking the varsity court for a final time, they will be looking to take the team to another NCS championship. With the usual schedule challenges in University and Lick, this team is full of former JV players hungry to make their mark at the next level. The sole sophomore, Sean Ingoglia, recently transferred from Bay, and is looking to make a strong impression after the 60 day transition period. Outside of conference, Salesian is a highlighted game on the schedule, a grudge match that could go either way.  The way the varsity guys are feeling about the team, however, it doesn’t look like they can be stopped. This was evident in their commanding tournament win over Cloverdale in the Redwood Classic this past weekend.

The JV team is full of sophomores that have started to develop into a well-oiled machine on the court. Most of them, having played on the freshman team last year, work together as a cohesive unit on the court. Sophomores from the JV team last year: Jorim Powell, Kelvon Golson, and Will Brown, step into leadership positions. This solid group of sophomores will be in charge of mentoring the freshman, who have fought hard for their spot on the team. Freshmen Miles Amos, Alex Byrd, Spencer O’Brien-Steele and Jason Arzhintar will look to contribute in any way to the team.

The freshmen team, as always, is a development squad full of untapped potential. Full of talented freshman trying to make an impression, this young team is raring to go. Look for them to make as much noise as they can, playing against the JV teams of other BCL schools.

As always, we will look for another season chock full of strong, energetic play. The new seniors will look to set an example of sportsmanship for the freshmen and lead by example. All players will be taught the invaluable lesson of playing with courage and integrity.