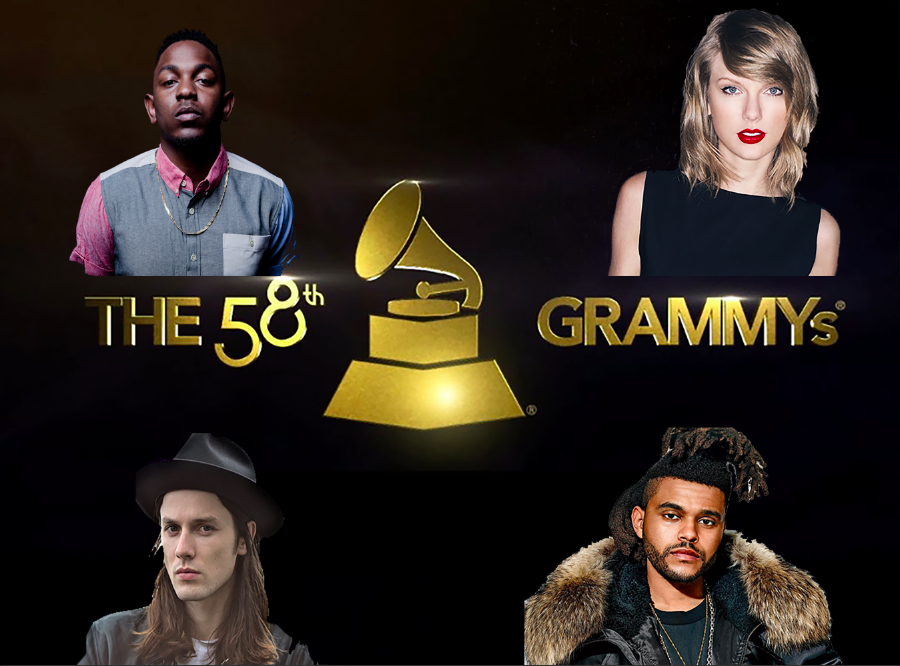 The 58th Grammy Awards will be televised on February 15th.

The 58th Annual GRAMMY Awards are coming up, February 15th, and the competition is extremely strong. With albums from artists like Kendrick Lamar, Taylor Swift, and The Weeknd all contending for GRAMMYS, the picks are extremely tough. Rising artists like Meghan Trainor, Sam Hunt, and James Bay have also established themselves as strong new musicians and should be on everyone’s radar in the coming years. Now for the predictions:

“Blank Space” is my top contender to win record of the year for three simple reasons: It’s catchy, everyone can enjoy it, and it’s non-controversial. While songs like “Can’t Feel My Face” are better in my opinion, the story of the song is about The Weeknd’s love for cocaine and how he needs it all the time. “Blank Space”, however, is a very typical Taylor Swift love song which always does well on the charts and at award shows. You may not be a fan of the song, but it’s hard to find a serious issue with it. The beat is catchy, Taylor Swift sings well as usual, and the replay value is high. Overall, “Blank Space” is the best pick for song of the year.

Album of the Year: Beauty Behind the Madness – The Weeknd

Of all the albums this year, The Weeknd’s, Beauty Behind the Madness was the strongest overall piece. The Weeknd has had a massive year, releasing singles like “The Hills” and “Can’t Feel my Face”. He rounded up his year with this album which encompassed those singles along with another set of extremely strong songs. Records like “Real Life”, “Losers”, and “Tell Your Friends” were some of the best songs to come out this year and just added to the strength of the album. The only reason I can see this album losing is because of it’s heavy emphasis on drugs and drug use, which may set up Taylor Swift’s, 1989, to win the award due to its likeability. Overall, The Weeknd’s, Beauty Behind the Madness, was the strongest album to be nominated and should take the award.

Song of the Year: Thinking Out Loud – Ed Sheeran

Ed Sheeran’s, “Thinking Out Loud” is an extremely good song. There’s not much else to say. The melody is nice and his voice is good. The lyrics are soothing and the song can be great to focus on or listen to in the background while doing homework. Ed Sheeran consistently puts out extremely good music and this is no different. It’s hard to find something about this song to dislike. Whether you’re a die hard rock, rap, or country fan, everyone can agree that this is a good song and deserves at least the song of the year award.

In all honestly, my knowledge of these nominees is not great. However, I think James Bay will come away with the win even though he’s not as popular as Meghan Trainor or Sam Hunt. After listening to songs like “Let It Go” and “Hold Back the River”, I feel like he’s one of the strongest artists to emerge in recent times. While Trainor and Hunt could win for their catchier radio hits, I believe that James Bay’s music is stronger and deserves the win.

While I think there were better songs this year that didn’t get nominated, Glory is the clear winner from the list of nominations. John Legend’s chorus is beautiful and Common does a great job on the verses. However, that’s not why “Glory” will win the award. The main reason is the message it sends. “Glory” was created for the movie Selma which followed Martin Luther King’s fight for black rights. The song keeps this message intact and fights the same fight. The musicality mixed with the message makes this the best rap song of the year.

While the nominations do not reflect my opinions of rap music this year at all, even I can’t deny that this album will win rap album of the year. To Pimp a Butterfly was one of the best received albums by critics, ever. Praised for its musicality and important message, it received some of the best scores a rap album has ever seen. Chronicling the struggle of racism and poverty, To Pimp a Butterfly is undeniably a very important and influential album. Among listeners, this has been one of the most controversial albums of all time. Ask anyone what they think about the album and the answer is never, “It’s okay.” You either hate this album of love it. However, no matter what side you find yourself on, you can’t deny it’s insane critical success and influence on the rap community as a whole. These reasons make it rap album of the year.