SFPD honors heroics in the Hall 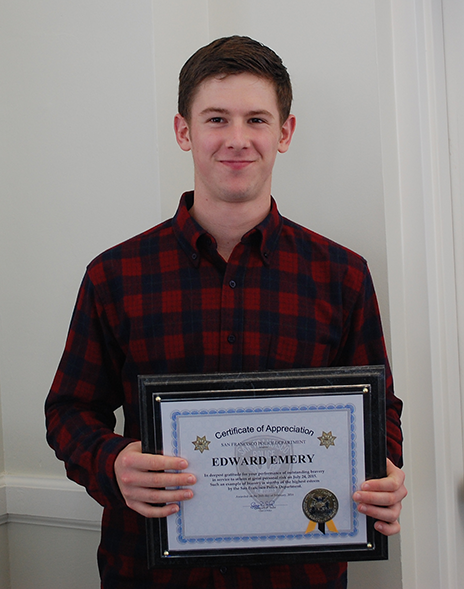 Edward Emery poses with the award that he received from Police Chief, Greg Suhr

On Tuesday, March 1 new information about Alex McDonald ’17 being part of the heroic efforts came to the roundtable’s attention so the article has been rewritten.

As everybody knows, today in our Friday chapel service, Edward Emery ‘17 was  presented with an award for brave actions in representation of justice. San Francisco Police Captain, David Lazar, told the story about how he apprehended and detained a thief in the North Beach neighborhood of San Francisco. The thief committed a violent robbery of a woman’s purse. He outran the woman’s boyfriend but when he mistakenly ran the wrong direction, he was caught and held by Edward. The thief ended up with possession of marijuana and hundreds of dollars worth of the woman’s possessions. He was arrested within minutes. This is very courageous and really says a lot about students at the Hall. But what does Edward Emery have to say, himself?

Edward was in the neighborhood in the first place because he was working a summer job as a busboy at a nearby restaurant. He finished his job and eventually met up a friend, Alex McDonald ’17. While walking around Washington Square Park, the two heard a commotion going on. They later saw two men chasing after each other. It was obvious that the man being chased was a thief based on the shouting from the couple. Edward said that he saw the man chasing the thief fall to the ground. As Officer Lazar told us, “Thieves never run up hills.” But this one did before he doubled back down, unsuspecting that Edward and Alex were at the bottom waiting. Edward told me: “He reached the bottom [of the hill], I tackled him and kept him until the police came.”

Other than a personal account, you know the rest of the story. It was a short story, but its short length exemplified the fact that Edward didn’t need to think a single minute before putting himself at risk for others. It was a well-deserved accolade for Emery and was achieved with assistance from McDonald as well. Hopefully, these heroics will gain these two appreciation in the future.