Which Music Provider is the Best?

an in depth analysis on music streaming services 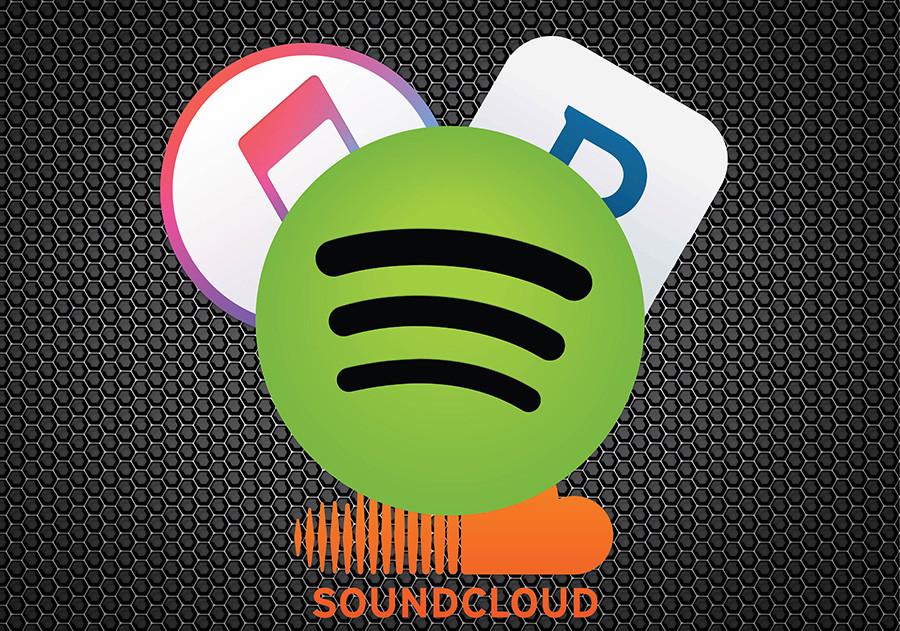 Four music services compete for title as America's favorite. But which one really is the favorite?

Streaming music has become the new go-to way to listen to any and all songs. For anyone who listens to even an average amount of music, it is extremely cost efficient to pay for a streaming service than to continue and buy every new piece of music that seems appealing. It also allows you to expand diversity in music genres because there is no pressure when picking music. You’re not paying for each song so you can forget about songs with no damage to your conscience, or wallet. While there are tons of music streaming outlets available, we will be reviewing Spotify, Apple Music, Soundcloud, and Pandora and going over the pros and cons of each.

Spotify is the bread and butter of music streaming. With the largest library of all the services, it is hard to find a song not in its library comprised of over 30 million songs. Coming in at $10 a month, Spotify costs the same as its most similar competitor, Apple Music. On top of this, you can add members to a family plan who will pay an additional $5 a month each. However, you can use spotify for free but ads will play occasionally between songs. The feature that makes Spotify so effective is its ease of use and sense of community between listeners. Linking your account to Facebook is easy and allows you to share playlists with friends or simply view what they’re listening to. Overall, Spotify is a strong pick for any avid music listener.

Apple Music is Spotify’s newest competitor. Debuting in 2015, it is Apple’s take on music streaming. However, you’re not gonna find many differences compared to Spotify. They might as well be the same thing. The main advantage to Apple Music is its family plan, which only costs as additional $5 a month ($15 total including base $10 fee) and allows up to six people. It lacks the Facebook connection of Spotify which is one of its best draws, allowing listeners to be social with their favorite songs and artists. Overall, Apple Music is a fine choice but there’s little reason to pick it over Spotify unless you intend on using multiple people in the family plan.

-Lack of connection with friends

Soundcloud is an odd music service. Not only is it free, there’s no paid option at all. Allowing anyone to upload any song they want, it’s the home for amatuer artists but also boasts music from some big names too. Artists like Drake, Travi$ Scott, and Kanye West occasionally use SoundCloud to release songs early and get feedback before official releases on iTunes and streaming services such as Spotify. While SoundCloud sounds like a dream come true, it comes with many faults. Firstly, all songs must be streamed, there’s no downloading. Secondly, it boasts the smallest library of the four services we will be reviewing. Many top artists won’t release their songs on SoundCloud so many of the versions available on it are either low quality or altered. While SoundCloud does hold a niche role and should be used by all, it’s by no means a go-to music service to be used as a main listening outlet.

Pandora creates a giant radio, tailored to songs and artists that you pick. It is a free service, with ads, but gives the option to remove them for $5 a month. Pandora is odd because you don’t have complete control over what you listen to, all you pick are the songs and artists that are similar to what you want to listen to. Overall, Pandora is good for finding new music and is a strong music service that can be used for free. While I wouldn’t recommend using Pandora standalone, it is always good to complement either Spotify or Apple Music as a secondary music streaming service.

-Lack of control over music