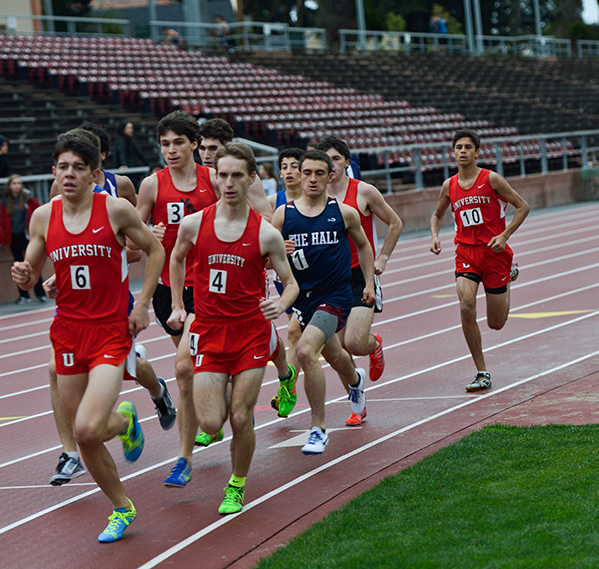 Eli Horowitz '17 makes waves in the track and field world through shattering records and staying one step ahead of the competition.

“Runners take your marks, set, BANG!” This is what Convent and Stuart Hall’s track and field team has become accustomed to hearing with the track season in full swing. The Hall is looking poised to repeat as BCL West League champs with a promising second place finish with 128 points, only 13.5 points out of first place in the BCL West Meet #1. The Hall can attribute this strong start to the record numbers that have flocked to the track and field team. Overall, on the Stuart Hall and Convent track team there are 83 athletes which is almost one-fourth of the combined school’s population. 55 of the athletes are boys from Stuart Hall and 28 of them are girls from Convent. The track and field team will try to use this record depth, teamwork, and emerging superstars who will try to make up for the four Division I athletes lost to graduation.

One of these superstars is junior captain Eli Horwitz. Horowitz had a breakout year during the cross-country season. That success has carried over to track season where Eli has won the 1600, 800, and anchored 4X400 relay team in both league meets. In the 1600, Eli set the school record with a blistering time of 4:23.88 where he ran away with the race in the last 200 meters. In the 800, he ran the second fastest time in Stuart Hall history with another very impressive 2:02.20. In the BCL West Meet #2, Eli ran an inspired anchor leg in the 4X400 to hold off a late push by University. He also broke the school record in the 800 meter dash with a time of 2:00:01. The Hall’s teamwork was showcased in this race when newcomer to the relay team, Phoenix Aquino-Thomas, helped shave two seconds off the team’s time which ended up being 3:40.24.

Coach Buckley was very impressed with the 43 personal bests that were set in the young season. One of those personal bests was set by Convent senior, Laurel Cinti, who lept to a new school record in the long jump with a jump of 15-02.50, beating the previous record by 1.5 inches.

Another superstar and captain is junior Alex McDonald. Alex runs the 400 meter dash, 300 meter hurdles, the anchor leg of the boys 4×100 relay, and is the first leg for the 4×400 relay. In the 400 meter dash, Alex took second place in a hard fought race with a time of 54.72, continuing his reign atop the league in the 300 meter hurdles with a time of 43.20, and helped his relay teams to strong finishes. What makes Alex’s success even more impressive is that he is battling multiple leg and ankle injuries while still succeeding.

For the throwers, senior captain Omid Ravanfar and junior stud Alex Berbey lead the charge while being the best two throwers on the team. At BCL Meet #2, Omid placed third with a throw of 104-02 in the discus competition, and Alex threw a huge personal best that was good enough for second place in the meet with a mighty heave of 105-08. Overall, the throwers took first place in the competition with with a narrow 14 to 10 win over University.

Coach Buckley is very excited and hopeful for the season and said, “The boys are poised to take over 1st with a bit of improvement and the addition of the last complement of athletes to come out (from basketball).  The girls are much improved over last year–as a group and as individuals–and I’m fired up for what they can accomplish.”

As it turns out, Coach Buckley’s prediction was correct and in the second league meet The Hall ended up defeating University by a score of 145.5 to 132. The basketball players contributed greatly to the victory with the new contestants placing 2nd, 3rd, 4th, and 6th in the triple jump. Sophomore, Sean Ingoglia, wowed the league with a jump of 19-1 on his very first time ever long jumping.