the roundtable represents in So. Cal 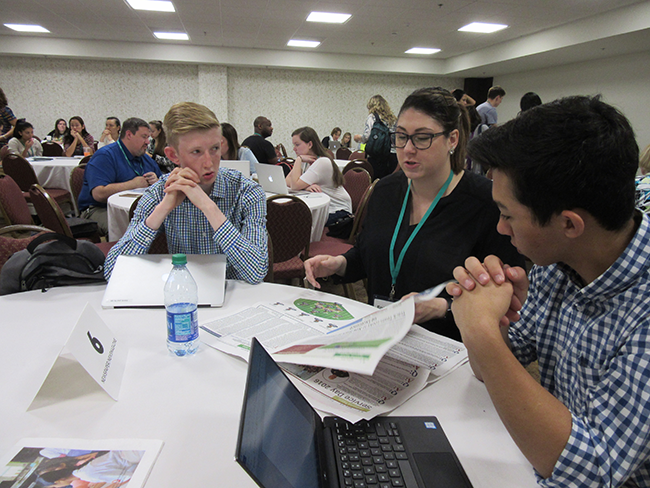 The editorship sits down with a professional to discuss to print version of the newspaper.

The roundtable staff embarked on a trip last week as they traveled to Los Angeles for the NSPA/JEA National High School Journalism Convention. While in Los Angeles, the group of six staff members and one broadcasting club member stayed in the Westin Bonaventure Hotel, accompanied by advisor, Lori Saltveit.

The inexperienced group of sophomores hoped to learn a lot at the convention, so that they can help bring the roundtable to new heights. “I learned a lot of things about how to look professional and how to handle your newspaper, and for me personally, I learned a lot about sports and sports reporting,” said Sports Editor, Harry Billings.

The group stayed two days and two nights, attending information sessions, meeting with other newspaper staffs, and professionals from the journalism industry. “It was interesting, I met with a guy from the LA Times, and we talked a lot about changes that we could make with our paper to improve readability and the general feel,” said Associate Editor-in-Chief, Nick Hom.

The trip was important and informative for the whole group, as the staff made up of entirely underclassmen hopes to improve the paper, in the midst of a lot of change. As was reported two weeks ago by The Broadview, the roundtable will be taken over by Ms. Tracy Sena next year. Ms. Sena is currently the advisor of The Broadview and she will continue in this role, along with advising on the roundtable. The roundtable will meet in the publications room at Convent, starting next year. Besides that, everything else about the paper is unclear. The administration is still making decisions regarding the logistics of the newspaper class, but decisions are expected to be released in the not-too-distant future.