Will you go to Prom with me? 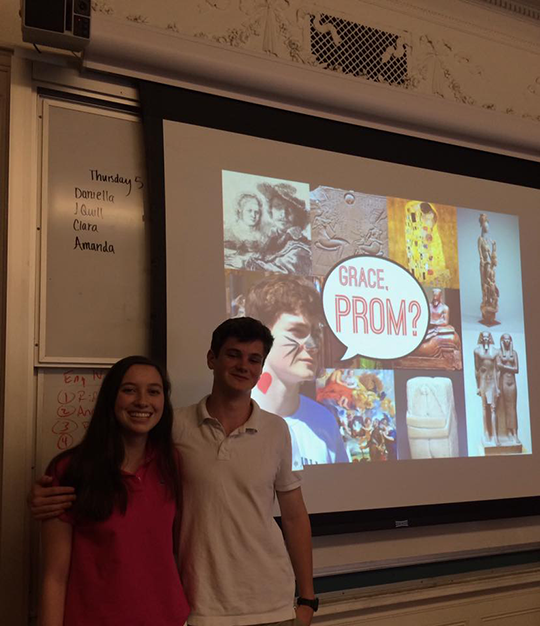 Prom. After a quick internet search, it appears that an American family will spend an average of $1,139 on Prom. On the night of May 14th, students will be dressed up and ready for a night of pictures, music, and slow dancing. This year, prom will be held at the Flood Mansion at the Convent campus. Something almost as important as the dance itself is the way you go about asking your date. A promposal is defined by Urban Dictionary as “a proposal from one person asking another person to the prom; is the combination of the words ‘prom’ and ‘proposal.’“ Many of our very own men at The Hall have thought of some pretty imaginative and creative ways to ask their dates. Here are some.

For those who prefer something a little bigger than a “will you go to prom with me?”, there is always the option of making a meaningful sign. Harry Doyle ‘17 has already devised his plan: “I’m planning on running into Convent at lunch with a poster and flowers and asking her if she’ll go with me. I was planning on doing it today, but the girls have college counselling.” Ah, isn’t a hassle when details don’t work exactly like you plan? The good news for Harry is he still has some time before May 14th. Good luck to him! Much like last year, a Facebook group was created where students can post videos/pictures of their promposal, and whoever gets the most likes on their ‘posal gets two free tickets to prom. Seeing as each ticket costs $60, this reward incentivised Dante Cheung ‘16 to think of a creative way to ask his date. He recounted his nerve racking promposal: “I went on stage during the A Capella concert and I had my fellow Acohollers [the name of the A Capella group] each hold up a sign with the letters P-R-O-M-? And then I said ‘Laura, I’d be really jazzed if you went to prom with me.’” What an idea! Were you nervous? Dante chuckled a bit and responded, “Yeah, I’d say quite a bit. It was more nerve racking because it was in front of a lot of people instead one-on-one. But that made it that much better when she said yes.” Dante mentioned he’s ahead in the Facebook race right now, and hopes to win the tickets: “I’m pretty excited if I win the promposal contest. It’s hard because the guys are expected to be the ones to pay for everything, and I don’t really want to shell out another $60 to pay for my date.” We get you Dante, although chivalry is definitely not dead, $120 for a couple hours of dancing seems a little steep. Win those free tickets!

Kudos to all those brave souls out there asking that special someone to prom. It takes more courage than one might think, that’s for darn sure. If you are still in need of fancy attire, contact Mr. Roos or Patrick Dilworth to take advantage of the 40% off at Men’s Wearhouse. Be sure to check out the Facebook page to stay up to date on the latest ‘posals and remember to click that ‘like’ button on your favorite one. Prom is only a couple weeks away, the countdown has started!