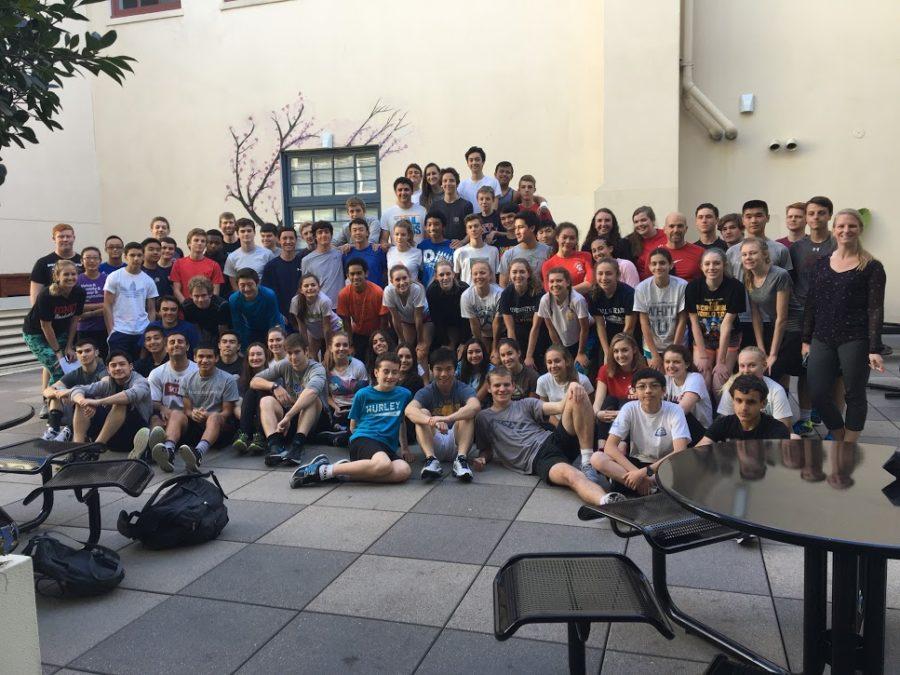 The track team poses for a team photo during a practice at Stuart Hall during the season.

Over the last month, Coach Buckley and the track team have had intense practices due to important meets.  Athletes are really training hard to improve their personal records. The Bay Area Conference Championship meet on May 14 is the final league meet. This is where the best of the league go to compete to try to make it the Class A meet. The top six from each event qualify for the Conference Championship which means that some athlete’s seasons are coming to an end.

Omid Ravanfar ‘16, Alex Berby ‘17, and Hunter Mainzer ‘18 have been excellent this season and have been really working hard on technique.  Alex Berbey had two impressive results for both throwing events. He got 117 feet in discus and 40 feet 9 inches in shot put. After getting these impressive results I asked him how the practices in this past month have really pushed him to get a huge achievement.  Alex Berbey explained that “The season is coming to an end and I really wanted to get past the 40 mark in track. These practices have really been great since we are focusing on fixing individual problems which has really made me feel more comfortable in the ring.”

The long distance runners have been really looking great this season especially sophomores Phoenix Aquino-Thomas and Antonio Dominguez who have been getting outstanding times in the 1600m race. Eli Horwitz ‘16 has been the athlete of the season for track and field by dominating in his events and was invited to run in the Stanford Invitational and the Arcadia Invitational. He did our school proud by placing in the top 12 in each invitational. Eli holds all three long distance records for The Hall.

The hurdlers and long sprinters have really had intense training lately because of how physically demanding their events are. Alex Macdonald ‘17 once again is dominating in another sport winning the 400m event multiple times over the season.

Sprinter and jumper Jorim Powell ‘18 has really been exciting on the track and in the jumping pits. He recently got 38ft in triple jump and got a blistering 11.77 seconds which is the third best time in Hall history behind LaBoyd Ricard ‘12  and legend Bosco Bapoupeleh ‘15. In the upcoming seasons, Jorim Powell will be one of the best athletes in the league with his work ethic since he does football and basketball on top of track and field. The team has had a great season and will be a great team in the upcoming year.