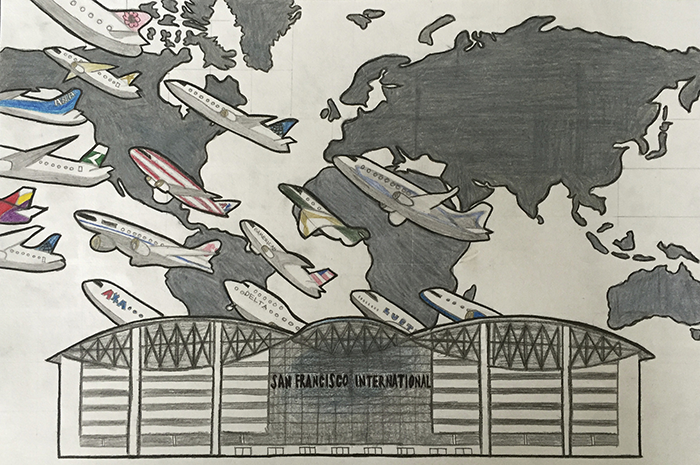 Stuart Hall represents well at SFO through their exhibit.

You may have heard about the new art exhibit at SFO, Destinations. For instance, the mugs that some of you may have bought to support the school show off certain works that can actually be seen at SFO Museum at San Francisco International Airport. San Francisco has set itself apart from other airports and even other cities by exhibiting now for the third time, art created by students at Schools of the Sacred Heart. In this instance, The SFO Museum incorporates visually stunning art while emphasizing the importance of education. This type of spirit at the museum represents the attitude we have in the city. San Francisco’s reputation as a beautiful, cultured city is only strengthened by practices like this. Luckily, for several years now, we at The Hall have been able to participate.

Our very own Patter Hellstrom established a strong relationship with SFO in order for this art to be so widespread. The first exhibition, The Map is Not the Territory was organized and shown in 2013. Fly Over followed in 2014. This was so well received by viewers that the curator of the SFO Museum, extended the exhibition. All of these expos differ in what their exact focus was but all have a twist of travel incorporated into them. The Hall’s previous exhibits set high expectations for Destinations.

Starting in August last year, the work for Destinations blazed new ground with the inclusion of artists from not only Stuart Hall, but Convent as well. Thirty-three artists in all from both schools contributed to helping the exhibit reach SFO. Going along with this year’s motto of “Paths to…”, using destinations as the main topic was perfect. Student artists used different mediums to break the normalcy of one monotonous medium of art. Students painted, drew, made prints, used digital design, made collages, took photography, and combined mediums to make the art that is representing our school well.         A few student pieces especially stand out including those made by Will Kahn ‘18, Edward “17 Emery, and Nick Hom ‘18.  Those are the mugs which were sold to us before Spring Break. These mugs are now featured as gift store items at the SFO Museum too. People from all over can come to San Francisco and look at art created by students at Schools of the Sacred Heart. These destinations can become more than just a place, but a visual experience to remember.