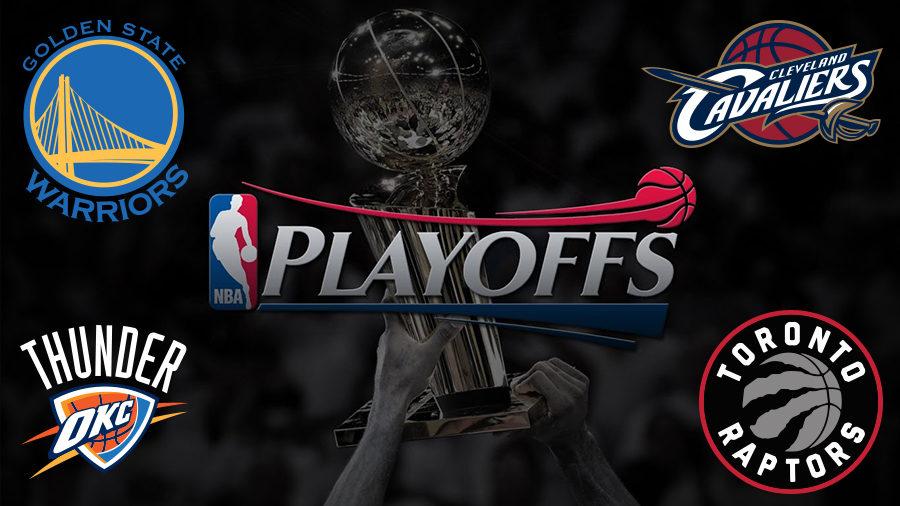 Four teams competing for one trophy.

Out west, the Golden State Warriors are matched up against the Oklahoma City Thunder. The Warriors handled their semi-final opponent, the Portland Trailblazers, with ease. League MVP, Stephen Curry, was out with a knee injury for most of the series. The Thunder are coming off of a strong series against the predicted favorite, San Antonio Spurs. The Thunder’s hard-nosed defense showed strong in the series, as they held the Spurs to 100 points or less in every game.

In the first game of the Western Conference finals, the Thunder beat the Warriors 108-102 at Oracle Arena, as Russell Westbrook led the team with 27 points and 12 assists. The Warriors bounced back in game two, controlling the action and winning 118-91 behind Curry’s 28 points. Game three was last Sunday night in Oklahoma City, in a game the Thunder dominated. The Thunder won by 28 points and look to increase their series lead to 3-1 in game four on Tuesday night.

In the east, heavy favorite, the Cleveland Cavaliers, face off against the young and athletic, Toronto Raptors team. The Cavs have been perfect in the playoffs this season, sweeping both the Detroit Pistons and Atlanta Hawks. Lebron James and Kyrie Irving have led the team, and look to make a push for a championship this year. The Raptors’ first two series both went to 7 games, but they managed to beat the Indiana Pacers in the first round and squeak past the Miami Heat in the second.

Game 1 of the Eastern Conference Finals served as a reference to prove just how good the Cavaliers are this year. The Cavs dismantled the Raptors, 115-85. Cleveland’s 30 point win was the largest playoff win in franchise history. Lebron James and Kyrie Irving combined for 51 points. Games two and three were hard fought, but the Raptors ended up on top, winning both games. The series is currently tied 2-2 with game five scheduled for Wednesday in Toronto.