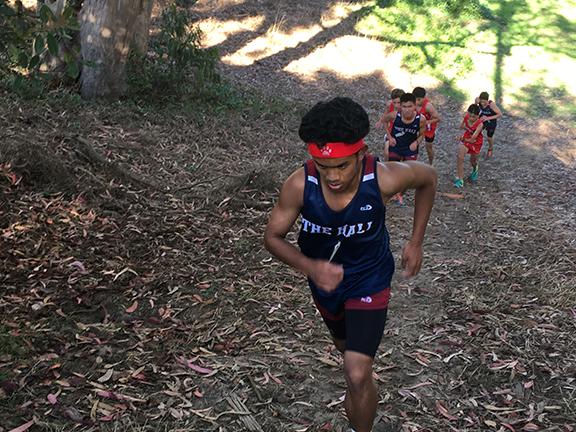 Skylar Dela Cruz '19 starts the ascent up a hill at Golden Gate Park. The cross country team will compete next at the Castro Valley Invitational.

Rejuvenated with new runners and guided by experienced captains, the cross-country team is breaking records as it moves into the the middle of its season and the Stanford Invitational last Saturday.

“Things went pretty well,” coach Michael Buckley said. “Eli Horwitz (’17) won the race outright in 15:59 for 5K, which is about 5:09 per mile. It continues an unbeaten streak he has this season. He hasn’t finished anything lower than first place this year.”

Horwitz dominated the division by placing first out of all runners.

The team placed tenth out of 24 teams in the race, which is solid, although the team would have liked better scores, according to Buckley.

In preparation for meets, coaches are teaching runners how to develop the basic fundamentals of cross-country.

“As coaches, we hope all of our runners learn the concept of commitment and teamwork,” assistant coach Laura Lyons said. “Once freshmen join our team of over 50 guys and girls, they discover how runners work together to motivate each other and improve their skills.”

Runners are expected to develop an understanding of self-discipline and commitment.

The Convent & Stuart Hall team began conditioning in June as a coed group, although girls and boys compete separately. The training regiment was an adjustment for many of the new athletes, but they became more comfortable as they progressed.

“Being at nearly every practice during the summer really helped,” Rainier Dela Cruz ’20 said. “My muscles got used to the training aspect throughout the summer.”

Buckley says he expects team captains to bring a positive mindset to the cross-country community.

“We’re blessed with four truly great captains, all of them seniors — Eli Horwitz, Patrick Dilworth, Katie Newbold and Olivia Hoekendijk,” Buckley said. “They practically lead in practice and competition by making sure schedules are met and efforts and attitudes are solid.”

The hardcore training progression adds to the sense of commitment to the team.

“Buckley will usually make the workouts more intense and increase the distances we run as the season progresses. If we fall behind, we lose our opportunity,” Travis Evans ’19 said.

The idea that a team has the persistence and grit to train at a championship level brings the presence of dignity amongst the runners.

“It’s a great honor to be able to compete at such a high level, and being that talented can really raise a team’s morale,” Evans said.

In order to reach the championships, each runner must be strong-minded with their determination to push their teammates to the next level.

“I expect my teammates to be locked in mentally at every race,” varsity captain Patrick Dilworth ’17 said. “Our team is looking for a bid at the state championship this year, and we have a great group of runners to make that happen.”