Wrestling gears up to repeat as league champs 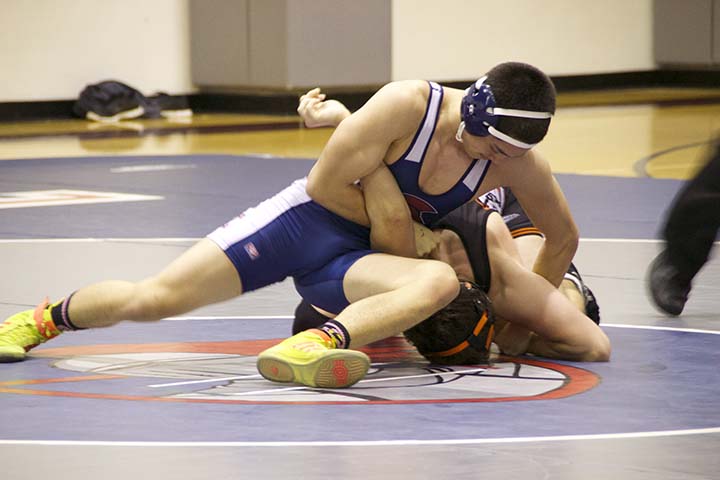 Jacob Hubbard ’17 executes a move while wrestling at Stuart Hall last winter. Hubbard and Alex McDonald '17 look to lead the wrestling team in their final season wrestling for The Hall.

With many team members training during the offseason, wrestling is preparing for a return to the North Coast Section where the team placed third last year.

“I expect to win the league again this year,” coach Matthew Woodard said. “I’m certain that we will almost send the entire varsity team to the NCS championships this year with the talent on this team.”

New teammates are expected to develop a committed mindset while trusting in the process as they begin to understand how the sport works.

“A wrestler needs to have a keen mind that can adapt to change quickly,” Alexander Berbey ’17 said. “You have to be thinking multiple moves ahead before you even make your first move. This changes due to the opponent’s fighting style.”

Wrestlers are beginning their everyday training regimen as they move into the regular season.

“Stepping up cardio training is one of the first things we do,” Berbey said. “You do a lot of free wrestling and running. The training itself is physically demanding, but it pays off on the mat. Better conditioning tends to equate to more wins.”

The grind doesn’t stop at physical preparation. Bringing in new members is a challenge due to some of the negative connotations that wrestling carries.

There’s lots of misinformation, but solutions have been made to protect wrestlers from skin disease, according to Woodard. Coaches are educating their wrestlers to keep them safe from skin infections which occur when microorganisms are transmitted between athletes.

“We require all the wrestlers to shower immediately after wrestling since viruses and fungi can transfer from the mat,” Woodard said. “Our rate of fungal infections almost went to zero, combined with the shoe coverings that basically eliminate any type of fungal infections.”

The team members aren’t worried about league schools preventing them from repeating as champions, but there is concern regarding regional competition.

“The Central Valley schools are always a challenge,” Alex McDonald ’17 said. “They’ve got some tough farm boys out there.”

Some wrestlers are focusing beyond NCS.

“My goal is to make it to states,”  McDonald said. “I fell short of that goal by two places last year, and I am determined to make it happen this time around. I worked on the technique of my double leg takedown at the Oregon State Wrestling Camp over the summer.”

Coaches are foreseeing a championship title as they hold faith in their adept wrestlers.

“They put in the work to advance,” Woodard said. “They put in lots of work in the off-season and they’ve gotten better and better. They’re experienced wrestlers.”