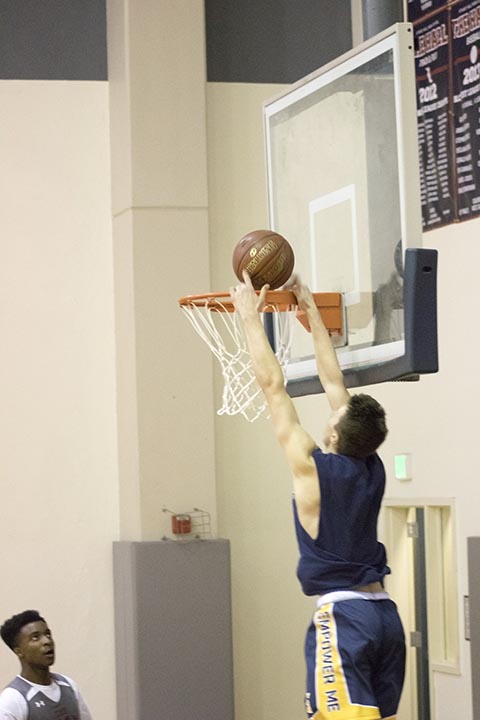 Sean Ingoglia ’18 dunks at the Knights' first practice of the season on Monday. Varsity's first game is at St. Ignatius next Wednesday.

Following last year’s heartbreaking triple overtime loss in the NorCal Finals game, the Knights are amped up and ready to go this season and are eying a state championship.

“Our goal is to go as far as we did last year, except we want to win league and state this year.” Jeremiah Sullivan ’17 said about winning the BCL West and NCS. “I think our quickness and unselfishness will be key this season.”

Miles Amos ’19, new to the team, looks to have a large impact on games and help be a young leader. Amos was the best player on JV last year, as a freshman, and has spent a lot of time during the offseason working on his game.

“I’m very excited to have the chance to have an impact on the varsity level.” Amos said. “It’s something I’ve always wanted and I hope that I can contribute to the team in any way I can so that we can have a successful season.”

Varsity and JV will scrimmage at St. Ignatius on Nov. 16, opening the season, with JV playing at 4:30 p.m, followed by varsity at 6 p.m. Being a Division 3 team, SI was one of the few strong teams in the city the Knights, then a Division 5 team, did not compete against last year, so this year’s season opener is highly anticipated.

“I think that both league and NCS will be a challenge for us this year, but we are definitely ready for the chance to compete,” Ingoglia said.
Varsity’s preseason runs until Jan. 10, with league play starting up at Stuart Hall against defending league champion Lick-Wilmerding at 6:30 p.m.

This game is a grudge match for The Hall, having lost to Lick 71-59 in last year’s BCL West league championship game.

The Knights have a tough season ahead, with strong league opponents followed by the first year of NCS in Division 4, after being moved up for its successes in previous years.

“I’m very excited for this year’s season.” Andrew Hua ’17 said. “Despite losing five seniors and moving up to Division 4, I feel that we have a solid group of returning players along with a good group of new players which will give us a shot at taking back the league title this coming year.”