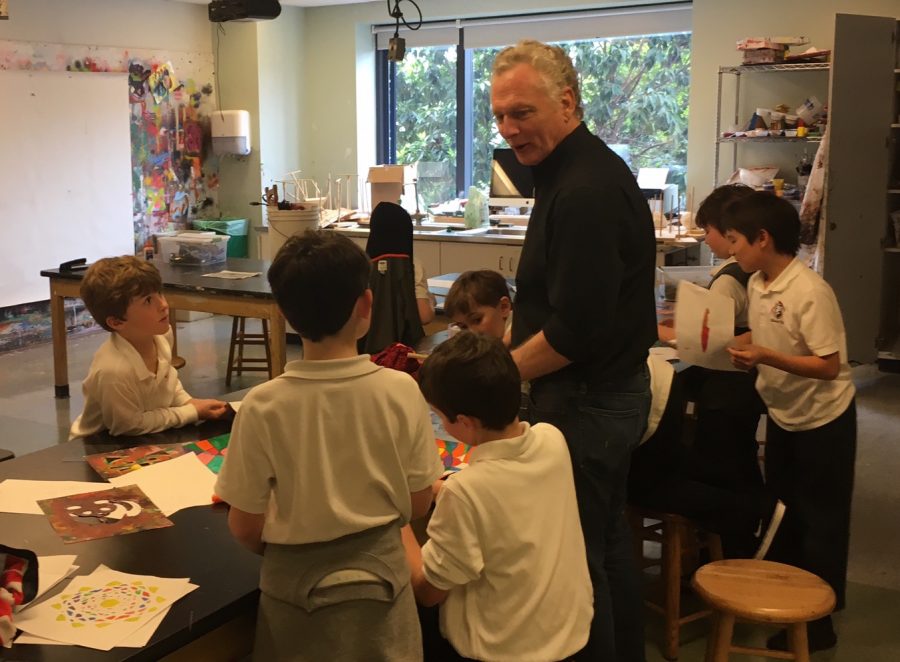 Will Jaggers works with his Stuart Hall Boys students during a scheduled art class. Jaggers' art will be featured in a campus art show that opens in the Syufy Gallery tomorrow night.

`A series of art shows featuring the work of Convent and Stuart Hall teachers and students opens tonight in the Syufy Gallery on the Broadway Campus.

The galleries, “In Dialogue: Beyond Worlds, Take 1-3,”  like the workshops that created the art in them, are hosted by Carl Heyward of the Global Art Project.

“What we’re thinking about in all of these shows is the role of abstraction and leveraging [visiting] artists working with students to grow in their understanding of abstraction and build areas of collaborations and like-minded thinking,” Visual Arts teacher Patter Hellstrom said.

Heyward founded Global Art Project, an international group of mixed-media artists in 2012, and the group has since hosted workshops and galleries in the United States, Mexico, Italy, and many other countries.

“He gathers artists from all over the world,” SHB art teacher Will Jaggers said. “They’ll gather in different places and do a workshop with the local community and artists. He feels he can bring an Israeli artist and an Iranian artist in, and they can work together and politics are not there, it’s all about art.”

For several weeks students and teaching artists from Stuart Hall High School, Convent and Stuart Hall For Boys participated in workshops hosted by Heyward to learn about the artistic process instead of simply the result, and come to understand abstraction in art.

“He said ‘draw random stuff’ it can be whatever you want to do,’” Freddy Kiaie ’18 said. “We even closed our eyes and were randomly drawing on the paper with sharpies and different kinds of pencils. And from there he said ‘stop, fold your paper in any way you want to, and here’s a different tool.’”

The opening reception is 5:30-8 p.m. tonight night, but pieces from the workshops will be showcased in a series of ongoing exhibits on both campuses.