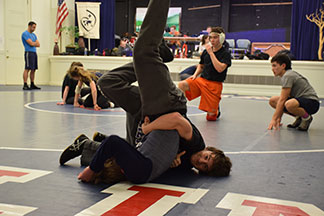 Lucas Horwitz ’19 executes a move during a wrestling practice. The team competes Friday at the Bay Area Conference Championship.

With Knights wrestling competition finished, the team looks towards the individual competitions, having finished a successful campaign by capturing a second place finish at the North Coast Section Championships last Saturday and winning the Bay Area Conference Championship at the California School for the Deaf on Feb. 8.

“I expect most of the team to qualify for the NCS individual tournament,” wrestling coach Matthew Woodard said. “There is chance that we can send two guys to the CIF tournament, which is pretty amazing.”

Hubbard, who is 25-7, leads the team in nearfall points, nearly pinning your opponent, which is worth two or three points, and in technical falls, winning matches by 15 points or more.

“With the end of the season closing in, I think my teammates and I will start peaking at the right time,” Hubbard said. “Without my coaches helping me through the season and constantly being pushed in practice by [McDonald], I don’t think I would have had the success I have had.”

McDonald is not to be outdone as he leads the team in takedowns and pins. The senior also claims four tournament wins and a second place finish at the Granada Mat Classic. His 20-1 record is the best on the team.

“I expect to be top three in NCS and qualify for state,” McDonald said. “I’m just going to go as far as I can and enjoy myself.”

The Knights will be in action tomorrow at the California School for the Deaf as they compete in the Bay Area Conference Championships to fight for spots in the individual NCS competition.

Seven of the wrestlers from this year’s team have previously competed in NCS.

“It’s what the whole team works towards,” thirdyear wrestler Michael Liu said. “It’s the last time for a bunch of wrestlers to be in high school so it gets to be one of the most energized tournaments of the year.”

With three tournaments remaining in the schedule, the Knights who advance to the individual portion will have to rely on their skill and experience. ”

The team is getting better and better every year,” Woodard said. “Not a bad season, considering I only had four weeks to put it together.”