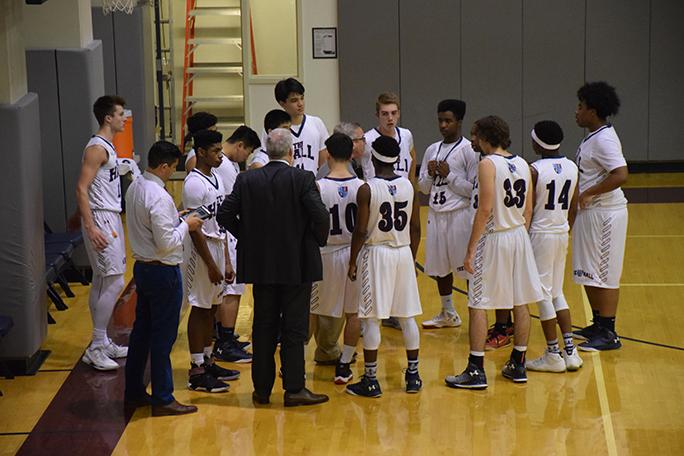 The Varsity Basketball team huddles around Coach Johnson during a timeout. The coaching staff hopes that careful planning will improve their chances in upcoming games.

Basketball is ramping up for its first-round game of the CIF Division 4 State Tournament against Half Moon Bay High School this Wednesday.

The Knights have qualified for the state tournament in each of the past four years, but the team’s recent promotion to Division 4 makes the road to a state championship more difficult.

“This year should be tough,” head coach Charles Johnson said. “The jump to Division 4 is a monster. It’s filled with all great teams.”

The Hall’s most recent game resulted in a tough 64-40 loss to top-ranked St. Joseph Notre Dame, but that hasn’t rattled the morale of the team.

“The loss to St. Joe’s was frustrating because we felt that as a team we could have played better,” Benjamin Cross ’18 said. “That said, we have done a good job to mentally and physically prepare for Half Moon Bay through focused practices.”

Stuart Hall took a six-point victory in a matchup earlier this year.

“Throw out the seeding,” Johnson said. “HMB is a beast. This is a coin toss game. They have a very deep team and a master level coach. This should be a war.”

The Knights look to continue to ride the high performance of stars Miles Amos ’19, Sean Ingoglia ’18, and Darná Stewart ’17.

“For me to be able to help lead my team to the state tournament as a freshman, it’s a very proud and exciting moment,” Amos said. “I’m looking to continue playing my role to give us a chance to make it to the state championship game.”

Tip-off is scheduled for 8:30 p.m. at Kezar Pavilion. Students who present a Convent & Stuart Hall I.D. at the door will be given free admittance.