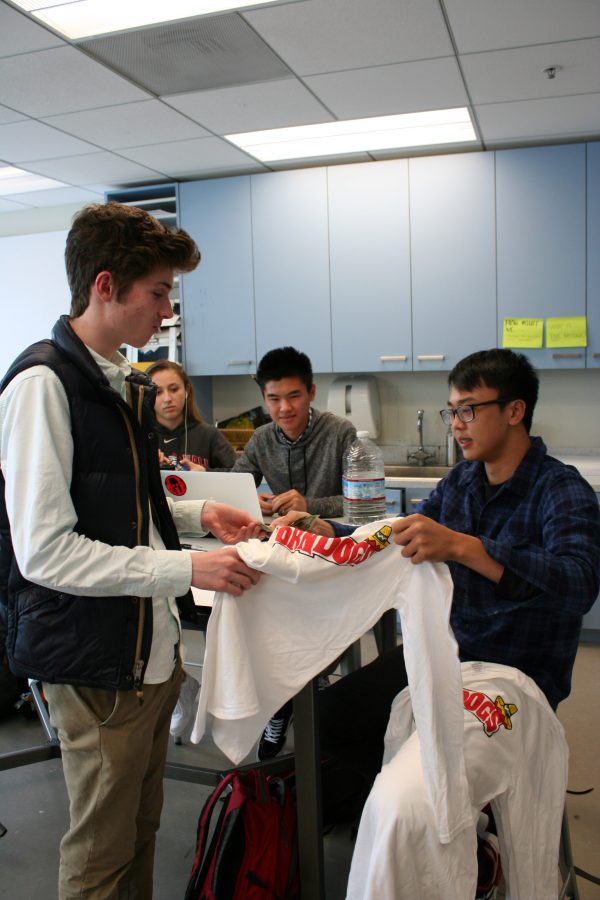 Michael Liu ’18 sells a shirt to Dylan Kelly ’17 at the end of art class in Siboni. Liu founded his shirt company with a few of his friends and has been selling shirts at school for the majority of the second semester.

While some students are preparing ideas to win this year’s annual, four-division, $2,500 Launch Grant, some students have gotten ahead of the curve and begun their own companies in hopes to use grant money to further their companies’ growth.

Visual Fanatic, a company started by student body president Michael Tellini ‘17 and run by a group of eight Stuart Hall High School students spanning all four grade levels, specializes in the creation and distribution of sports-related infographics. Tellini had the idea for over six months and continued to build on his idea throughout the school year until he officially launched on Feb. 4, according to Tellini.

“I launched Visual Fanatic because it combines my passions for sports, statistics, entrepreneurship and media,” Tellini said. “I’ve always wanted a more visual form of quick consumption for news — particularly sports news — that uses statistics and data to entertain the audience.”

Tellini says he hopes to produce a steady stream of content to attract viewers, but current scholastic commitments limit the staff ’s production efficiency. The company’s Twitter and Facebook pages post infographics every few days, but Tellini plans to produce content on a day-to-day basis once school lets out for the summer.

“The Launch Grant would accelerate our growth through our Instagram marketing campaign,” Tellini said. “We’d be able to increase our growth rate by working with larger accounts from the get-go to boost our following. The effects of social growth are exponential, and the launch grant would increase our principal, paying massive dividends down the line.”

Few high school students have entered and qualified for the grant since the contest’s inception in 2015.

“I really had hoped for more high school applications,” President Ann Marie Krejcarek said after few high school students entered in the competition’s inaugural year. “I was disappointed with that number, but we’ll work on how we support that process.”

As Visual Fanatic runs its business online, FreshSF and Corndogs are battling against each other on campus. The T-shirt selling companies began operations within weeks of each other in February.

Corndogs founders, Michael Liu, Lance Fong and Kaito Henry, all juniors, decided that their t-shirt business could use the $2,500 grant to forward their plans.

“We were tired of watching people make clothes that none of us wanted to wear,” Henry said. “We felt the need to start making clothes that people wanted, and we want to use the grant to be able to increase our rate of production.”

FreshSF, founded by juniors Nicholas Everest, Nicholas Watts and Sam Cormier, based its original T-shirt design off a drawing that Watts created in his International Baccalaureate visual arts class.

“We decided to start FreshSF because we initially wanted to make cool shirts for ourselves,” Watts said, “then we realized that we could also make money and start a trend.”

FreshSF prints its original logo along with newer designs on Hanes-brand shirts, the group has made some profit from the business. While they did enjoy an earlier success than Corndogs, they decided that joining the Innovation Launch Grant competition would not be an optimal move for their business.

“We want to see how well we do on our own,” Watts said. “We are working on bunch of new designs and plan to release new stuff after spring break.” The deadline for all applications for the Launch Grant is April 23.