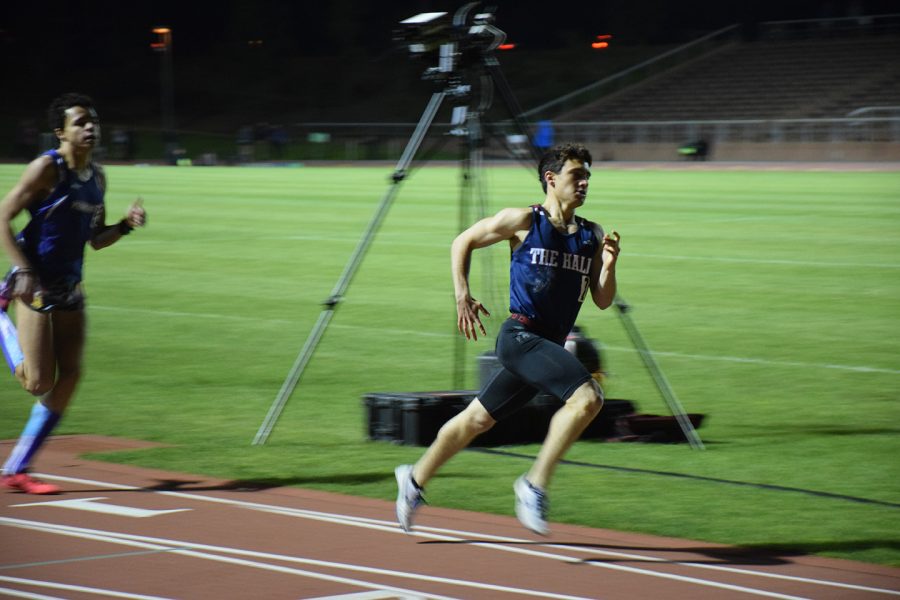 Elijah Horowitz ’17 leads the pack during an event at the Sunset Invitational. Horowitz, a leader on the track and field team, has competed in events across California this year.

Track and field athletes are looking to improve their personal record times while bringing in another league title after losing to University High School last year in the North Coast Section championships.

“We are a very well-rounded team who has a good shot at defending our league title and reclaiming our section title,” coach Michael Buckley said. “It’ll take persistence, and we can’t rest on our laurels since we have good opponents. We have to be on top of our game.

Senior runners are training to achieve long-time goals as they finish off their last high school track and field season.

rack and field season. “Alex McDonald ran well in the 110m hurdles (17.38), but really shone in the 300s, which he won outright in a time of 40.08, a new school record that currently ranks 5th in the NCS,” Buckley said. “We have lots of confidence in him against tough competition.

Although many of the team members are looking to personal bests or setting new records, some are nursing injuries.

“Last year it looked like I would have a solid chance to run in college, but after a couple of injuries this season, I’m not sure if I’ll be able to,” Patrick Dilworth ’17 said. “This season I strained my hamstring and missed first two-and-a-half weeks of track.”

Dilworth has found some temporary strategies for training while he recovers from past injuries.

“I have to wear knee braces every time I run,” Dilworth said. “I stretch my knees out frequently throughout the school day and have missed time because of my knees every single high school season I’ve ran.”

Eli Horwitz ’17 competed at the Arcadia Invitational — a high caliber track meet in the United States, according to Buckley, on April 7 at Arcadia High School near Pasadena.

“Arcadia is the biggest meet in the country, so it was really cool to have qualified,” Horwitz said. “My race at Arcadia was tough because the pace was slow. Nobody wanted to take on a fast pace and then burn out in the end.”

Horwitz is still optimistic to win more races after difficulties due to calf discomfort during the Arcadia Invitational.

“The race took a lot out of me. I finished in one of the slowest times of my life at 4:24 for a full mile,” Horwitz said. “I can’t say I’m not a little disappointed, but it’s caused me to be hungrier to run a personal best.”

The next competition is set for April 29 at the American River College for the Sacramento Meet of Champions.