KnightLight  looks to be oasis for students. 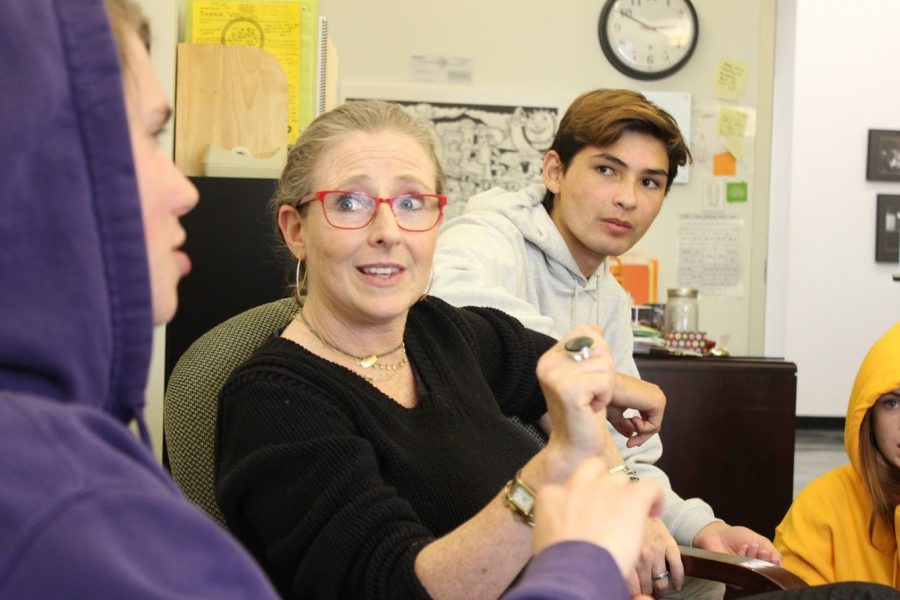 Laurie Pomeranz talks with Alessio Dominguez ’19 (near) and Harris Rutherford ’19 at a recent KnightLight club meeting in her office. KnightLight has planned a series of events on campus during finals week to help students cope with stress.

Close to 15 percent of teenagers will experience depression or another mental disorder, according to the Bloomberg School of Public Health, so a new club was formed to bring attention to and improve mental health.

“Our main goal is to improve students mental health at Stuart Hall through stress-relieving activities and teaching that it’s okay to talk about mental health and why it shouldn’t be stigmatized,” Ari Nagle ’19, who founded the KnightLight club said.

The club operates in correlation with Bring Change 2 Mind, a national mental health organization with a clinic in San Francisco. The nonprofit provides grant money and information regarding mental health, as wells as suggests activities to the club.

“My role is to work with schools across California to start student-led mental health awareness clubs,” Bring Change 2 Mind program manager Lian Logrin said. “We offer these student clubs various resources to educate their peers on the topic of mental health and self-care. We’re working with 105 schools right now, 19 of which are in California.”

The club’s name refers to how attention and hope are being brought to the subject, and according to Nagle. KnightLight puts extra emphasis on depression and anxiety sufferers.

Teenage depression and suicide rates have made “The New Yorker” and “Time” magazine headlines due to the rise in teen suicides, KnightLight is focused not just on mental, but general emotional health and supporting the community, according to school counselor Laurie Pomeranz.

“Anxiety, depression and attention-deficit disorder rates have increased in teens as of late,” clinical psychologist Alan Vitolo said. “Anxiety more so, because the pressure on kids by school and social media is so intense. Passing laws to make psychiatric help more available and eliminating the stigma around mental health is the best way to combat it.”

Most similar student-led clubs are more based on social skills while mental health, particularly a student’s own, are highly stigmatized, according to Vitolo.

‘We’re definitely still in the development stage,” Pomeranz said. “The kinds of things we want to roll out are assemblies, movies, conversations, stress-relieving activities for students, general things that will help educate students and support mental wellness.”

The club meets every Tuesday during Collab, usually in Pomeranz’s office, where ideas for improving student morale and relieving stress are discussed.

“I joined KnightLight because it seems like an interesting club and I wanted to be a part of something,” Nicholas Chupkin ’21 said. “I see anxiety all the time whenever tests come up and I hear people talking about cramming and worrying about grades. It’s everywhere. We’re organizing events to ease the anxiety and stress of finals week.”