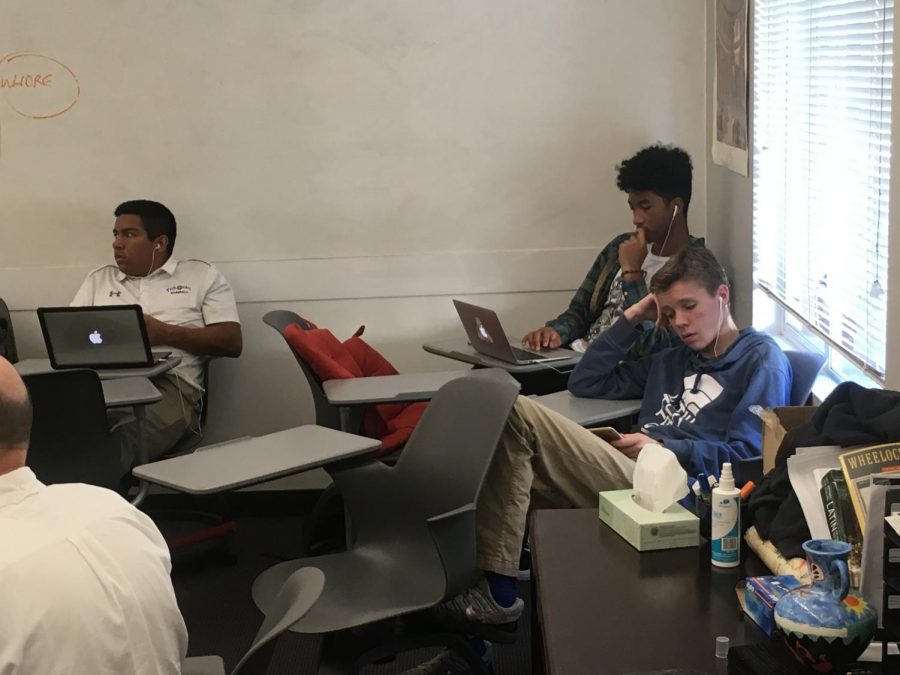 Seniors relax in class following the completion of an assignment. Teachers and administrators feel that it is the responsibility of seniors to ensure that they stay engaged in class.

As the majority of college deadlines having passed, the Class of 2018 faces the potential challenge of “senioritis,” the phenomenon of declining motivation and performance that affects seniors, especially during the second semester.
“Senioritis can affect motivation and efficiency,” Academic Support Director Rachel Herbert said. “I think for some people it comes from a fear of what comes next, and for others, it’s the result of overconfidence now that one is a legal adult.”
Even though college application deadlines have passed, colleges see both midyear and final transcripts and reserve the right to deny admission to an accepted applicant should the student’s senior-year grades drop, according to The College Board.
“It’s easy to think you’ve got all your work done and that you’re on your way out,” chemistry teacher Shannon Halkyard said. “I’ve seen the negative side of that with a student who got their admission rescinded.”
Faculty admit that senioritis existed when they were high school seniors, although there are a few noticeable differences with when it sets in and with what students do in their free time instead of homework. Nevertheless, teachers and administrators are leaving it to their students to make sure that they remain in acceptable academic standing and on track to graduate.
“Senioritis is the desire to do as little as possible at the end senior year and still graduate,” Dean Reynolds Marquette said. “Every school discusses it among the faculty, but as far as Stuart Hall coming up with some concerted action plan, no. By the time you’re a senior you need to take care of it yourself.”
Suggested treatments for senioritis from faculty include making action plans for all assigned work and trying to get the most use out of allotted study periods.
“I’d love to see more seniors working in my classroom,” Herbert said. “I’ve tried to teach more effective time management. Once a student knows where they’re going after school, I’ve also tried to help them figure out how to handle the next step, and develop the necessary skills now.”
Seniors have varying opinions as to who was suffering from senioritis and how badly, but admit it is happening.
“It’s just towards the end of high school you’ve put in all you have for three-and-a-half years, and now you’re just kinda done,” Jared Rafnson ’18 said. “I think pretty much every senior is going through senioritis right night now, including myself: not turning in homework, not showing up to class…both. People are taking their foot off the gas pedal.”