Knights look to senior leaders and freshmen to carry team to eighth-straight championship. 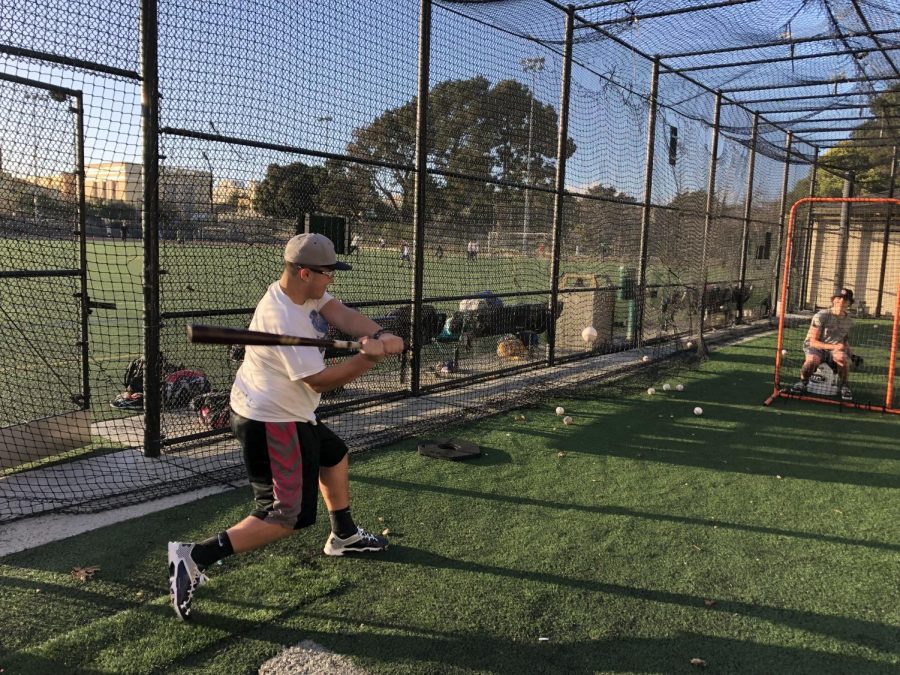 Angel Padilla ’18 takes batting practice at Kimbell field after school. The baseball team has been forced to find alternative ways to practice to due to the rains which have closed grass fields through much of March.

Knights baseball has stumbled out of the gate with 3-3 record, competing against strong competition across the Bay Area.

With four seniors graduating last year, the team is looking to the remaining starters to continue Stuart Hall’s history of success, winning the last seven league titles. The team has two new assistant coaches, Brendan and Kevin Schneider, who specialize in hitting and pitching, respectively. The Knights also have added Cecilia McQuaid ’21, the first girl on their roster in school history.

The team is led by captain Nicholas Hom ’18 who owns a team-best .444 average and is first on the squad in runs, hits, RBIs and doubles. Hom exploded for a three-hit, two-RBI game against Galileo on Feb. 24, which was the Knights’ first resounding win of the season.

“It’s been the best start I’ve had in high school so far,” Hom said. “I don’t know if it’s simply because I’m a senior and have more experience or that I feel the responsibility to be a role model and produce hits for a team that’s struggling offensively, but I hope that I can stay above .400 all season.”

The Knights followed up the 6-1 win over Galileo with a 6-3 loss to Sacred Heart Prep, a 1-0 loss to Aragon, a 3-2 win at College Prep, and 4-0 home victory against Urban in their first league game.

“We had a rough first inning against SHP that cost us the game, and our bats didn’t come alive against Aragon,” captain Will Kahn ’18 said.

Kahn is batting .312 in the young season, which is an improvement on last year when the catcher batted .200. His strongest area has always been fielding, where Kahn currently owns a perfect fielding percentage.

“Coming off my season-ending injury from last year, I worked really hard during rehab and summer ball to work on the things I thought could use the most work,” Kahn said. “I had taken more pride in my fielding than hitting up until my injury, but when I wasn’t able to throw, I turned my focus to hitting to try and balance out the two.”

The Knights face a strong league this year, which will make it difficult for them to capture their seventh league title. The team will try and defend their standing from their new home field at San Francisco State, where they practice and will play all of their home games.

“Going into league play, I think we’re looking pretty strong as we were able to hold our own against pretty strong opponents,” Kahn said. “Every player has been giving 100 percent at practices, and it’s been showing. I’m excited to see what we’re going to accomplish this year.” Owen Fah