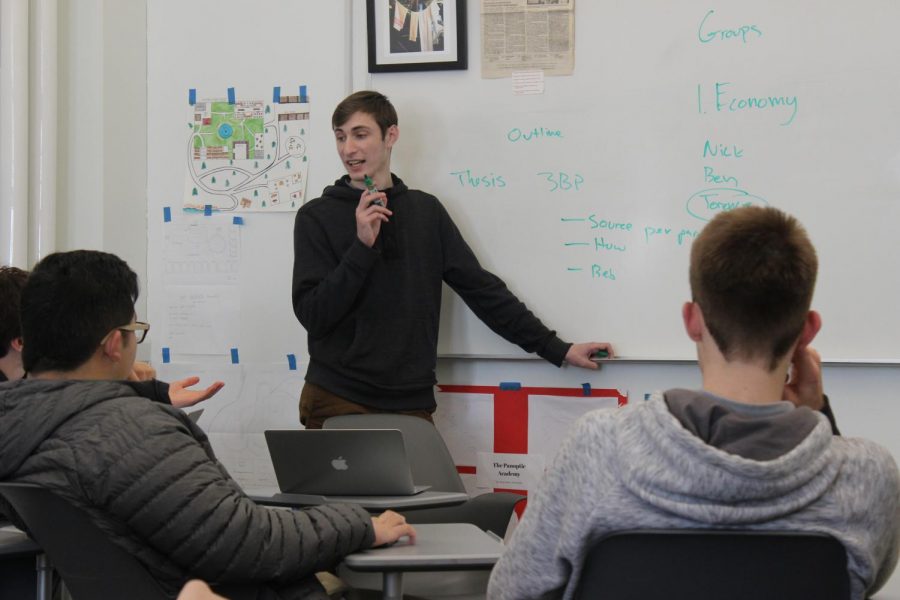 Jason Arzhintar ’19 teaches during the Theory of Knowledge class. Arzhintar and his classmates have started a club to bring attention to events that have fallen out of the news cycle or not received wide media attention.

Three juniors have created a club to address and bring awareness to forgotten or ignored issues that are important.

“We make projects and we have a website that coordinates different ways to be aware of causes that don’t make the media and don’t make the headlines,” Jason Arzhintar ’19 said.

Arzhintar, Lucas Horwitz, and Joshua Widjanarko created Forgotten Causes when they realized more awareness needed to be brought to events that weren’t publicized by the news for very long.

“The media will spend maybe one or two weeks on a hurricane, and then nobody remembers it two weeks later, so it’s putting the spotlight back on those types of disasters or shootings or events,” Widjanarko said.

The club is currently working on a project to raise awareness of the Venezuelan economic crisis that began in 2012 and devastated their economy.

“We made a small billboard that’s going to go up in the Morningstar Gallery on the second floor,” Arzhintar said. “We put it on our website, and we basically made a bunch of pictures and paragraphs that summarize the issue and show how it can be solved.”

Club members advise students to have a wider worldview and not focus only on their own lives.

“There are a lot of events that happen that people gloss over, because we’re all focused and in our own bubble,” Horwitz said. “Sometimes it’s important to bring our focus to a more global picture and on the things that are not directly impacting us.”

Forgotten Causes recently interviewed a Venezuelan immigrant about the crisis, then discussed what they learned at their Tuesday meetings.

“We wanted to get someone who had first-hand experience with living in Venezuela and living with the government they had,” Horwitz said. “We wanted to interview him to get a better picture of what it was like from a primary source.”

The experience was eye-opening for the interviewers.

“What we took away was that the situation has been building up for longer than we thought, essentially since Chavez was elected in 1999,” Horwitz said. “It really gave us context.”

The club’s website details factors contributing to the crisis.

Currently, the club has nine members who are all juniors, but they invite everyone to join.

“Anyone who wants to come join us is more than welcome,” Arzhintar said.