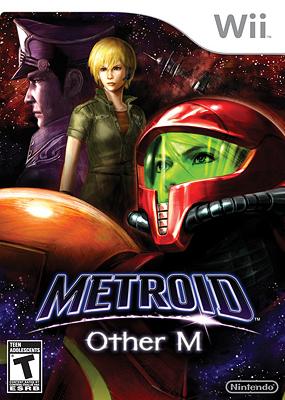 The Cover Image for "Metroid: Other M"

Nintendo has been no stranger to letting talented outside developers work on its most beloved franchises. From Capcom’s Minish Cap to Square’s Super Mario RPG and Retro’s Metroid Prime, all of these collaborations have been successful critically and commercially. Metroid: Other M is the latest of these collaborations, made by Team Ninja of Ninja Gaiden fame. Other M signifies a return to the series main canon, leaving behind the Phazon subseries and building upon the world established in

Team Ninja’s involvement is immediately noticeable from any piece of gameplay footage. Like the Ninja Gaiden games, Other M is focused on gorgeously animated, fluid and extremely brutal combat. Spectacular deathblows look remarkably similar to those found in the Ninja Gaiden series, in one technique, Samus jumps upon an enemy’s shoulders, wrapping her legs around its neck and firing her cannon into the back of the foe’s head. The in-engine graphics and CGI cutscenes are marvelous, with some of the best art-direction the series has ever seen despite some low-res textures.

Returning to the original Metroid canon, Other M is more heavily story driven than the Prime subseries, which were driven more by environmental interaction. The game takes place between Super Metroid and Fusion, in a period where Metroids have been wiped out from the universe. While wandering around space, Samus picks up a distress signal from an undocumented ship, which she immediately answers. Entering the deserted ship, she encounters the GF 07th Platoon, her old military battalion, having also investigated the signal. Discovering corpses and undocumented biological weapons, she joins the platoon in investigation. Unresolved ill wills are evident throughout her interaction with these characters, and what follows is an intriguing tale developing the Metroid universe in surprising ways.

Other M was intended to more fully characterize Samus Aran, who was previously a rather two-dimensional silent protagonist. Fans of her Prime iteration might be disappointed by her rendition in Other M. The Prime series portrayed her character as a mysterious and fearless warrior and one of the strongest non-sexualized female protagonists in video games. Other M’s iteration is somewhat inconsistent with her Prime design. Samus is considerably more insecure particularly around people. In one unforgivable scene, she agrees to shut down all her equipment at the demand of a former love-interest to show that she can “follow orders”. While Samus’s character is better developed, the jarring transition from super-powered adventurer to vulnerable child might put off some.

Gameplay-wise, Other M is a mixed bag of fantastic innovations and frustrating missteps. The core third-person combat is fun and stylish, platforming is fluid and fun and room-exploration is rewarding and satisfying. The game also features one of the best uses of motion controls to date, by holding the Wiimote sideways “NES-style”, the game takes a fluid third-person God of War-esque perspective. When pointing at the screen, the perspective switches to a stationary first-person view, where missiles can be fired and the environment can be better investigated. The use of the hybrid first/third person mechanic is unlike anything seen before and very well implemented.

Despite its resounding success in certain areas, Other M’s gameplay holds a few frustrating flaws that detract from the experience. In certain areas, Samus will stop moving and be locked into a first-person perspective. Here you’ll be tasked with investigating your immediate area to find an anomaly that advances the story. This obviously was intended to add a Phoenix Wright-esque sense of discovery, but fails entirely in that regard. Very often, clues will be vague, and you’ll be often left randomly pixel-hunting. Other M is also considerably more linear than other Metroid games. The ship might still be an open-world, but major portions of it are locked away until your commander gives authorization to access them, placing Samus in a linear race from point-A to B. There are no sequence-breaks and new abilities are “authorized” rather than collected, making Other M clash with the open-world exploratory nature of the series.

Overall, I enjoyed my time with Metroid: Other M. Combat was exhilarating and exciting and hundreds of collectibles are cleverly hidden throughout the world for rewarding exploration. Its story and characters are intriguing and well fleshed out. However, the linear nature of the game and the potentially divisive portrayal of Samus might put off hardcore fans of Prime. Despite its scattered frustrations and flaws, Other M is ultimately an entertaining romp through the world of ancient civilizations and organic bioweapons. Recommended. 3.75/5