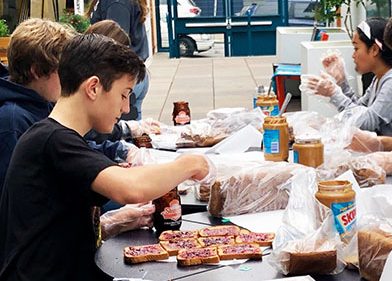 Freshman Vlad Korostoshevskiy helps prepare bag lunches for the homeless on Sept. 15. Although Students in Action organized the first One Less Hungry event of the year, most participants were not members of the club.

“Last year, we had [a lot of] students showing up weekly, but I would say of those students, a fraction of them were actually engaged in service,” Ray O’Connor, Students in Action faculty moderator, said. “The problem became how to make this team become more effective and support the goals of Students in Action while helping it to grow more purposefully and intentionally.”

Rather than having students in SIA participate in the majority of service events the program organized, the leadership team has been working on getting the entirety of Convent & Stuart Hall involved in service.

“The club has started to focus more on getting service events out to the community and actively participating in them,” student leader Henry Sears said. “I am looking forward to being able to accomplish more service this year because we have better organization.”

Although SIA has increased organization and productivity with a smaller group of students, approximately 50 members of the club were removed in May, leaving some students upset and confused.

“It felt like I was being kicked out of a service organization that was open to the entire school,” former SIA member Jackson Cady said. “I was reluctant to join the leadership team because the group felt predetermined and somewhat exclusive.”

Members of SIA leadership say they hope to re-expand to accommodate more members who are actually involved in service.

“What we hope to do is to bring more people onboard through monthly general meetings that actually invite people who are helping with service, who are actually involved in service through SIA on their own,” O’Connor said. “They truly are ’Students in Action,’ so they come to the meeting being able to say, ’This is what I do and this is how I do it.’”