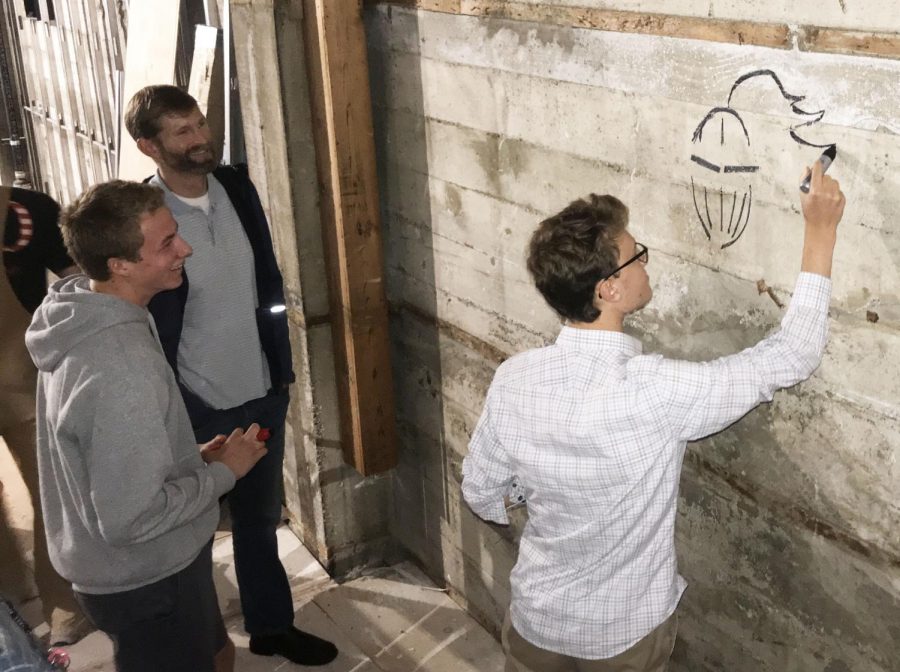 Senior Maxi Tellini draws the Stuart Hall Knight on the concrete of the Columbus Room before the construction crew begins putting up drywall this week. Although the room will be open to the students mid-winter, the kitchen will not be completed until February.

Two student leaders embodied this year’s theme of Heritage by marking the concrete of the Columbus Room with paint pen before the drywall was put up.

“We had the opportunity to leave our mark on the inside of the new Columbus Room,” senior Henk Veld said. “We each put something that was meaningful to ourselves and to our time at Stuart Hall.”

Both students say they feel that the Knights are losing their identity as the school considers one mascot and all divisions become known as Convent & Stuart Hall.

“We’ve been here since kindergarten, and we’ve been able to witness how our school has transformed,” Veld said. “We’ve been super active this year about bringing us these issues of where the school is headed and how it’s representing the students.”

Buckley says the mark is there for future generations to uncover.

“Hopefully 40 to 50 years from now when another renovation is done, that little bit of history can be revealed,” Buckley said.

This was not the first time students left a permanent mark on the building, according to Buckley.

“There are hand imprints of every student from the first graduating class in the concrete underlying the courtyard.” Buckley said. “That’s awesome.”

The seniors say it is their duty to pass on the tradition of the Stuart Hall Knights.

“It’s our responsibility to teach the younger kids what it means to be a Knight because it’s not really clear cut,” Veld said. “It’s reliant on upperclassmen to pass on these stories of what has come before us.”

Buckley, who has worked at Stuart Hall High School since its founding, added a virtue he says is important to him to the wall.

“It’s always great to be able to create those artifacts that solidify that tradition and acknowledge and commemorate that history,” Buckley said. “The quote that I wrote on the wall was ‘May we always act as persons of courage and integrity.’”

With the 20th anniversary of Stuart Hall High School coming up in 2020, Tellini says that the theme of Heritage is especially important to him.

“This is such a special year just for this campus that we want to actually go a little bit deeper than just that theme in a really intimate and personal history,” Tellini said. “We just want to leave that mark behind for the other classes, so there’s a sense of belonging, a sense of understanding of what makes Pine and Octavia so special.”