‘Knights of the Hall’ could be a thing of the past 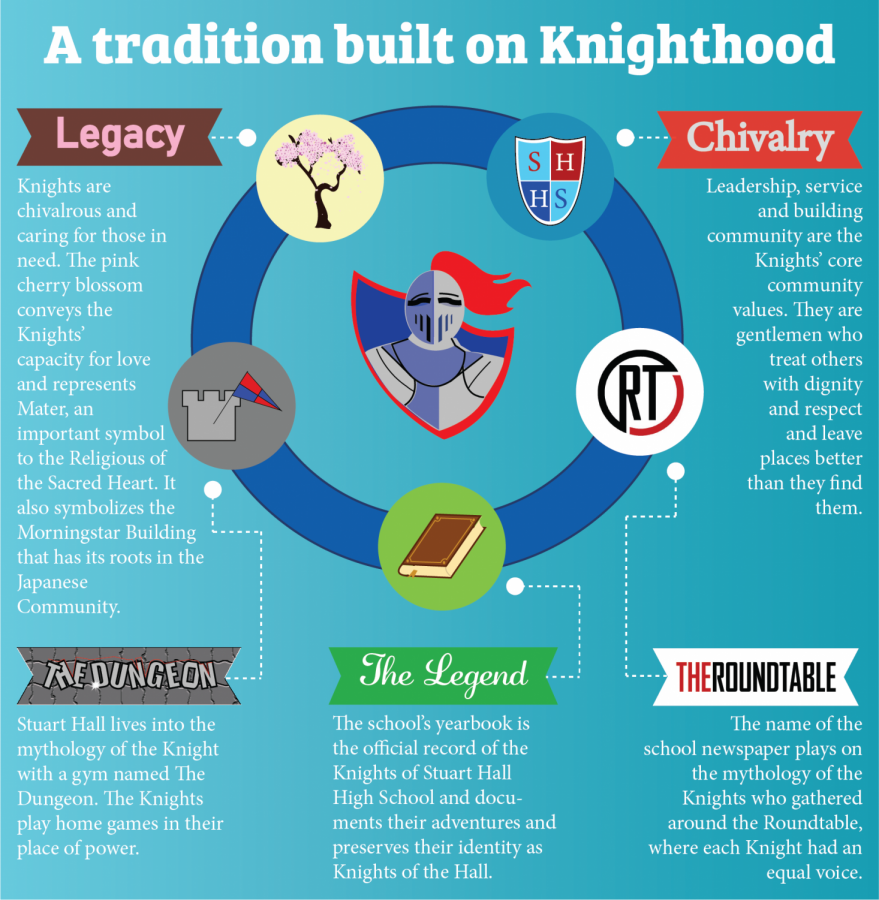 As Convent & Stuart Hall’s two high school divisions continue to align with continuity in assemblies, a shared logo and more coed classes, some students say that alignment could imperil the unique identity of Stuart Hall.
“Stuart Hall has always been the odd ball,” Student Body President Maxi Tellini said. “The campus is set apart from the rest, it has a special Japanese heritage, and it’s the newest of the four K-12 divisions.”
Convent & Stuart Hall may be one school that consists of four separate divisions, but historically those divisions have had noticeably different features.
Until the last three years, each division enforced a different interpretation of the dress code and had its own mascot. Some students say those differences were indicative of each division’s independent identity.
Stuart Hall athletic gear contained the Knight logo until 2016, which is when it started displaying images of the school’s four-division logo, a combination of a lion griffin and the Sacred Heart.
“A lot of recent classes believe the new logo will never convey the same meaning to the Stuart Hall community as the old mascot,” Tellini said. “The Knight, which I see as a symbol of the fact our school persevered through the threat of closing almost 10 years ago, and the story of James Kessler, are unique to Stuart Hall and not shared by Convent.”
The school was almost closed by the board dude to a budget shortfall in 2010, but collective efforts made by parents and faculty saved Stuart Hall. Two years later, James Kessler, a senior in the Class of 2012 died from cancer.
“The love and support James’ classmates offered him, as explained to us freshman year by Mr. [Sergio] Vasquez, can be represented in the Knight and what it stands for,” Tellini said.
For senior Henk Veld, the changes are visible in the physical campus.
“The independent Stuart Hall culture has been masked by recent changes,” Veld said. “Over the summer, meaningful murals were painted over that represented the unique Stuart Hall community for many.”
One mural, known as the Cherry Blossom mural, was painted by students in 2012 to commemorate the history of the Morningstar Building, a piece of the Pine/Octavia Campus that once functioned as a primary school for Japanese children who were excluded from public schools in 1906.
The murals were painted over to accommodate the repainting of the campus for maintenance purposes, according to Rachel McIntire, Visual Arts Department Chair.
“It is almost impossible to repaint around a mural, so we archived photos of the murals in order to always have access to them,” McIntire said.
McIntire also said the school’s mission of public art relies on change.
“The original intent of the mural across from the art studio was to have a wall where students could constantly put up new projects,” McIntire said. “That space has been undetermined, but students will be building on the tradition of the Cherry Blossom mural going forward. We aim to create a public art legacy that evolves.”
While the absence of the murals may have been a physically noticeable change on campus, the abandonment of the Knight mascot would impact all facets of Stuart Hall culture. The school newspaper The Roundtable and the yearbook “The Legend” both rely on the lore of the Knight.
When Stuart Hall used the Knight to represent its students, it was often linked to qualities of chivalry, service and courage. The gym — three stories underground and aptly named The
Dungeon — contains Stuart Hall High School’s original crest, which resembles a Knight’s shield, next to a quote from the school prayer that sets the goal for men of the Hall to act with “courage and integrity.”
“The Knight, the crest and the cherry blossom are images that carry the history of our school, the triumphs and challenges — everything that makes the community of Stuart Hall unique from Convent,” Tellini said. “We are working alongside [Head of School Tony Farrell] to create something in the new Columbus Room to commemorate our past and respect Stuart Hall’s special history and culture.”