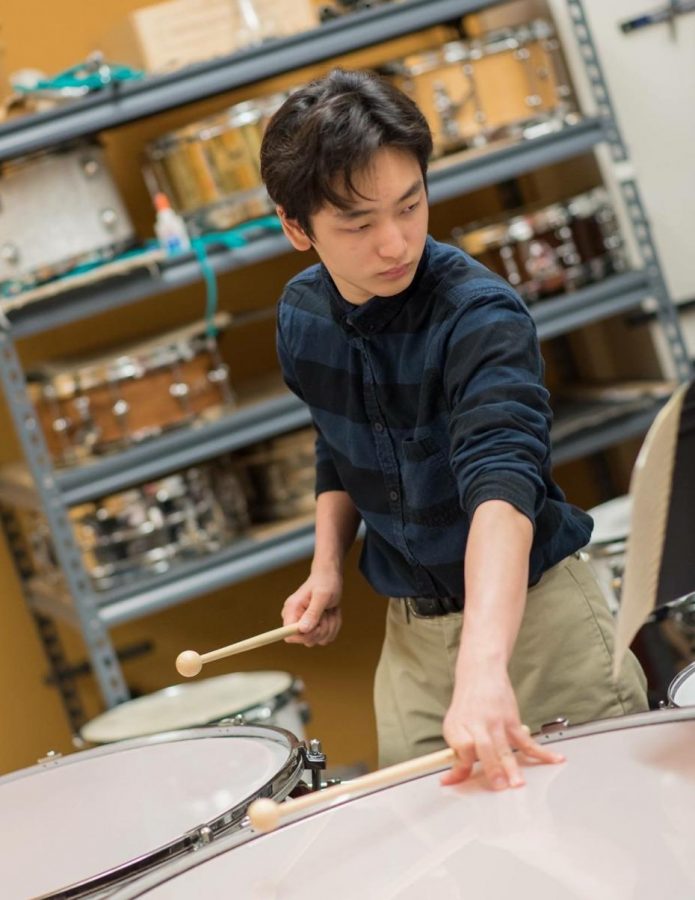 By Sartaj Rajpal and Nik Chupkin

Junior Shun Kodaira-Lopez plays the drumset for the San Francisco Symphony Youth Orchestra, but started his journey in music when he was just in preschool.
“I was four when I started with piano,” Kodaira-Lopez said. “I really enjoy playing for the orchestra because it gives me a chance to learn ensemble skills and how to play with other people.”
Kodaira-Lopez says playing the drumset takes a lot of practice and is a lot harder than it seems.
“We look like we just hit things and that’s it,” junior Shun Kodaira-Lopez said. “Yes, we hit things, but we hit them damn well.
Kodaira-Lopez says he also plays classical percussion instruments like marimba and timpani but prefers playing the drumset.
“Drumset is my favorite because my favorite genre outside of classical music is rock,” Kodaira-Lopez said.
Aside from practicing at home daily, Kodaira-Lopez rehearses for four hours with the orchestra every Saturday.
“When the concert gets closer, we do more intensive rehearsals on Sundays and some practice on weekdays,” Kodaira-Lopez said. “We usually have four concerts every year, without holiday concerts.”
The youth orchestra has taken Kodaira-Lopez on tour in major European cities like Berlin and Copenhagen, Denmark.
“We got to walk around town and learn about the cities we were in last summer,” Kodaira-Lopez said. “I don’t think I’ll have a better tour in my life.”
The tour ended in Budapest, Hungary, which Kodaira-Lopez says was a moving experience for him.
“It was the last concert of our [former] conductor Christian Reif,” Kodaira-Lopez said. “It was sad that he left. He was a great conductor and teacher. We learned a lot from him.”
While most of his endeavors in music take place out of school, Kodaira-Lopez participates in some of Convent & Stuart Hall’s music programs.
“I played in the Jazz Band freshman and sophomore year,” Kodaira-Lopez said. “As a junior, I started doing some coaching for the Jazz Band. Sometimes I play for the school at Masses or big events.”
Fellow Convent & Stuart Hall musicians attest to Kodaira-Lopez’s musical abilities.
“Shun has extreme talent, and was always very dedicated every time he came into the classroom,” pianist Alex Di Napoli said. “He brightened everyone else’s mood by playing, and inspired us all to play music at a high level.”
Kodaira-Lopez says he aspires to become a professional classical percussionist.
“I would love to come back to San Francisco and play for the symphony,” Kodaira-Lopez said. “I’m not really sure what I will become, but one thing I’m sure of is that music will always be with me.”