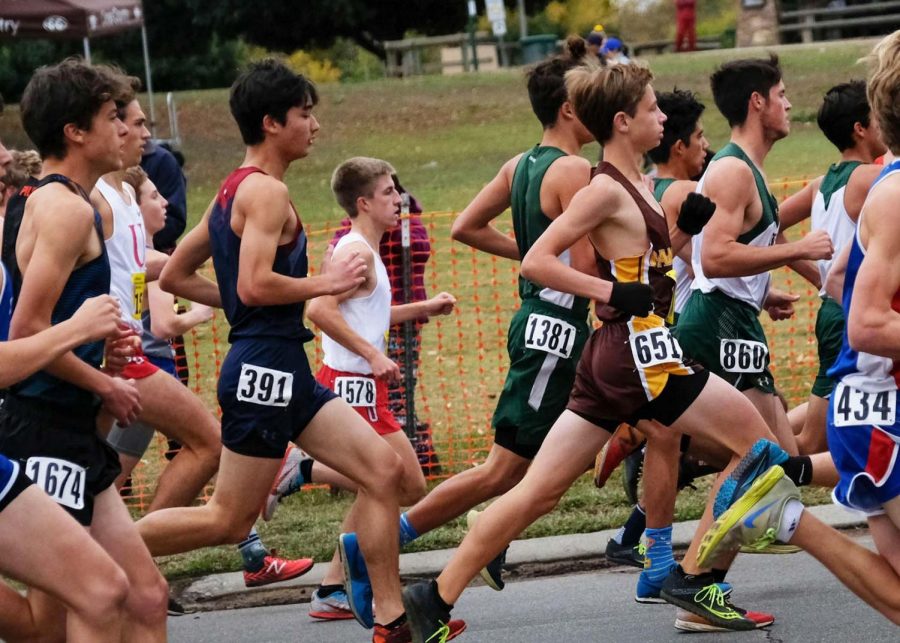 Senior Marcus Williamson (number 391) competes at the CIF State Championship for cross country on Nov. 29. CIF was the last race for senior athletes, who will leave the team after graduating.

JV and varsity cross-country teams finished the season placing fourth and second respectively in the league championship on Nov. 8.
Varsity runners continued on to the NCS Championship on Nov. 23 and CIF Championship on Nov. 30 in the postseason, where they placed fourth among all NCS teams.
“I am really proud of how our athletes performed this season,” varsity team captain Antonio Woo said. “A lot of our new athletes set enormous personal bests, and it is encouraging for the future.”
Woo ran a personal best in his final race as a Knight during the CIF Championship, posting a 17:20 — an average of 5:35 per mile.
“Cross-country challenges me both physically and mentally,” Woo said. “The toughness our team develops throughout our season is incredible.”
The Knights will lose many senior athletes due to their going to college next season, including five of the seven varsity runners.
“We are really going to have to get the team working hard,” sophomore Asher Thomson said about the team’s loss of seniors. “Hopefully we’ll get some fresh legs from the incoming class and the current members will continue working hard.
Thomson was the top JV performer in the league championship, posting an 18:41 and placing 17 overall in the JV race.
“The end of a long, successful season is often bittersweet,” head coach Michael Buckley said. “I’m proud of what our team accomplished at every level.”
Varsity runners say they were on track for a record-breaking season but were prevented due to injuries.
“The talent on both the boys’ and the girls’ ends of the team is encouraging,” Buckley said. “We’re looking forward to
capitalizing on the fast ninth and tenth graders that joined our team this fall and building to an even more successful season in 2020.”
In addition to the team’s success, many athletes say camaraderie and spirit is a hallmark of the cross country team.
“I love our team,” Thomson said, reflecting on the season, “especially in the downtime like after Mount SAC. It’s the most fun because I get to go on a trip with my boys, hang out and have fun.