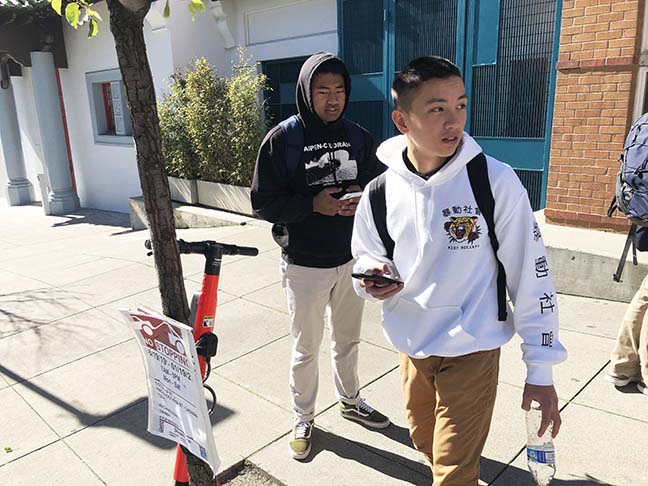 Senior Cole Slater and junior Trieu Tran wait for the school shuttle next to a Jump scooter parked in front of the Pine/Octavia campus. Electric scooter-sharing systems like Jump, Skip, Spin and Lime brought thousands of new scooter units to San Francisco after securing city permits in 2019, but the rise in scooters is correlated with a rise in injuries.

With a rapid increase in the accessibility of rentable electric scooters in San Francisco, injuries are becoming more common, according to a study conducted by the University of California, San Francisco.
“Every San Franciscan knows that about two years ago, there was an explosion in the amount of scooters in the city,” Dr. Benjamin Breyer, senior author of the study, said. “On balance, I think scooters are really good, but if they’re ridden carefully and with a helmet, I think they’re much better.”
Breyer’s study notes that hospital admissions have increased 354 percent for individuals aged 18 to 34 since the scooters started being used. San Francisco e-scooter companies require users to have a driver license and be at least 18 years of age.
Of those admitted to a hospital, the study states, “nearly one-third of patients had a head injury, more than double the rate of head injuries experienced by bicyclists.”
Breyer says he believes that while scooters are useful and beneficial to society, safety is key.
“Your center of gravity, you’re very upright,” Breyer said. “The chance that you fall and can’t protect your head is high.”

Convent & Stuart Hall students say they frequently ride e-scooters, oftentimes without taking safety precautions.
“I was riding down a hill without a helmet on, and I lost control of the scooter for a second,” junior Liam Walker said. “Next thing I knew, I was on the ground, and I knew something was wrong.”
Injuries on e-scooters are not limited to students.
“My fiancee and I and a few members of my family were riding scooters over the holidays,” biology teacher Alex Broussard said. “We sped up, and when I looked back [my fiancee] had fallen on the ground.”
Although wearing a helmet can protect riders from suffering the most serious injuries, the head is not the only organ that can be damaged in a scooter accident.
“She was screaming when we tried to help her up — she had broken her tibia,” Broussard said. She’s definitely not going to want to get back on one of them, and I don’t know if I am going to either.”

Even when trying to ride safely, injuries on e-scooters can still happen, as top speeds often exceed 20 miles per hour.
“Obviously, you want to wear a helmet,” Broussard said. “It would have been way worse if she had hit her head.”
Students often use e-scooters to travel easily and cheaply, as they provide a convenient mode of transport.
“I think the scooters are a pretty nice thing, as they allow me to get around the city very easily,” Walker said. “They can be extremely dangerous sometimes if you don’t know what you’re doing.”
The study stresses the importance of safety when riding bicycles, e-scooters or any other form of individual means of transportation.
“Head injuries can be minor, but they can [also] be catastrophic and lead to long term disability,” Breyer said. “That, on a lot of levels, is kind of scary. You have a whole life ahead of you. Your head is the most important organ in your body, and it’s a great investment to protect it.”