Team members say they will get better in postseason 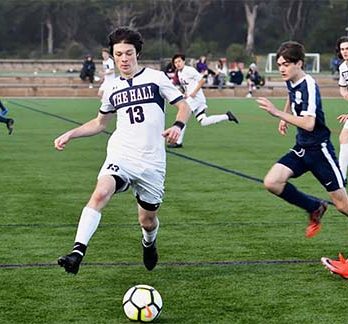 Junior Eamonn Kenny retains possession of the ball at Stuart Hall’s away game against the Urban School at Beach Chalet Soccer Fields on Jan. 16. Varsity ended the season 7-10-1, with players saying they hope to win at NCS.

Even though Knights varsity soccer had a league record of 4-6, team members say they have been working hard to improve for the postseason.
“We started off well in the season, but hit a rough patch,” senior Will Ryan said. “We are looking to get back on track for the postseason.”
Regardless of the team’s recent losses, players say chemistry is very high.
“Our team is really working well together, and our chemistry is looking great as we are all friends with each other,” center-mid Sam Dragone said. “We are truly a team of brothers.”
Team members say they have started doing things off the field to improve.
“Something new that we’re doing is that we are finally getting footage of our games sent to us,” Dragone said. “We watch the footage as a team to see what we can improve on.”
Players say that they’re working on being more concentrated during games.
“One goal for the season is improving on not losing focus when we have a lead or score in a game,” junior Aidan Settles said, “because the oppositions have caught us off guard a few times and scored when we were too relaxed.”
Members say the team has lofty goals for the postseason.
“This year, we are looking to make NCS and bring back a banner to The Hall, something that we fell short of last year,” Ryan said.
The Knights won their final game of the season against The Urban School 2-1.
“We’re getting back into it,” Settles said. “This season has been fun so far, and I think we’re going to keep getting better.”