Spring musical to cast all divisions 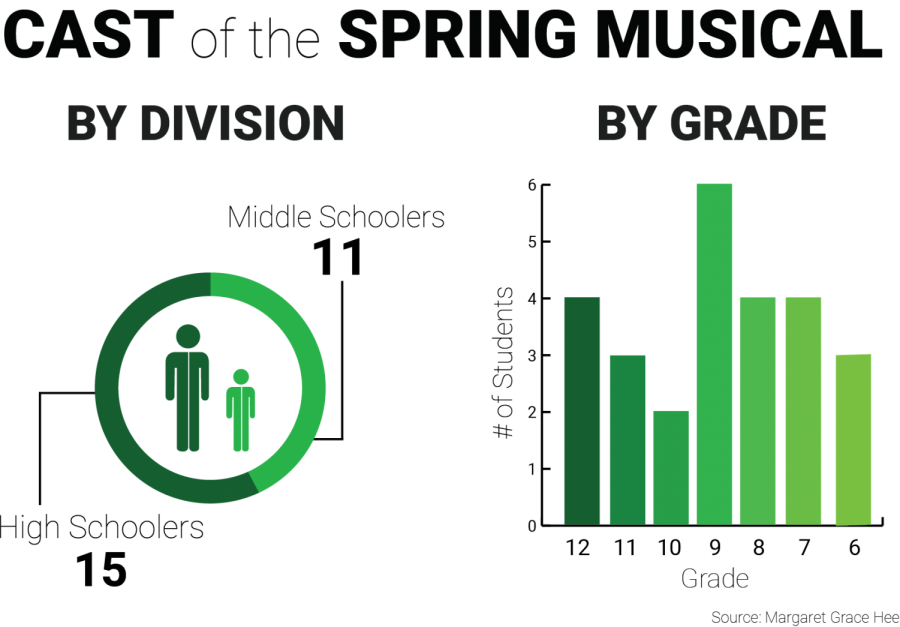 The middle school division will join the high school theater program for the production of “The Addams Family” this spring, and although high school students may play the lead characters, all four divisions will be on stage together.

“This model is challenging the way we think theatre should be created and by whom,” Theater Programs Director Margaret Hee said. “It is encouraging students of all ages to work together and empathize with one another.”
The change was made to promote an all-inclusive K-12 model, according to Hee. Since becoming Theater Programs Director in 2018, Hee has also implemented a mentorship program in which high school students assist the crew of middle school productions.
“It has been wonderful to see the divisions collaborate,” Hee said. “After the final performance of the sixth-to-eighth grade play, many of the cast and crew reflected how much they valued the opportunity to work with students in different grades.”
The middle school cast and crew are held to the same standards as their high school counterparts, according to junior Peter Wolfe.

“I worked with the middle schoolers in their musical last year, and they’re a talented group,” Wolfe said. “‘The Addams Family’ is the perfect play to join our two casts. It’s iconic and prestigious, yet equally fun and wacky.”
Wolfe is one of 26 actors in the upcoming production who are supported by backstage crew members like junior Mark Smith.
“I think it’s a great way to improve the theater program as a whole,” Smith said. “I’m excited to see how it’ll turn out, especially since I know a lot of middle schoolers after working on the middle school play.”
While the decision is valued by some, not all students are in favor of combining the theater programs for the spring musical.
“Being a lead in the Stuart Hall middle school musical was what really made me enjoy being on stage,” senior Trip Gorman said. “Now future boys and girls won’t get that opportunity to discover their passion for theater.”

This will be the first production Gorman won’t be a part of after participating in the theater program’s past three productions.
“Change is inevitably met with some resistance,” Hee said. “I see all the students who take part in this new model for the musical as agents of change.”
Hee says she does not yet know if the bridge between middle school and high school productions will be extended in the future.
“There are several exciting things on the horizon for the theatre program,” Hee said, “however, you’ll have to wait until we are ready to bring you all the news.”
Rehearsals will take place starting Feb. 24 and the musical will run April 30 to May 3.