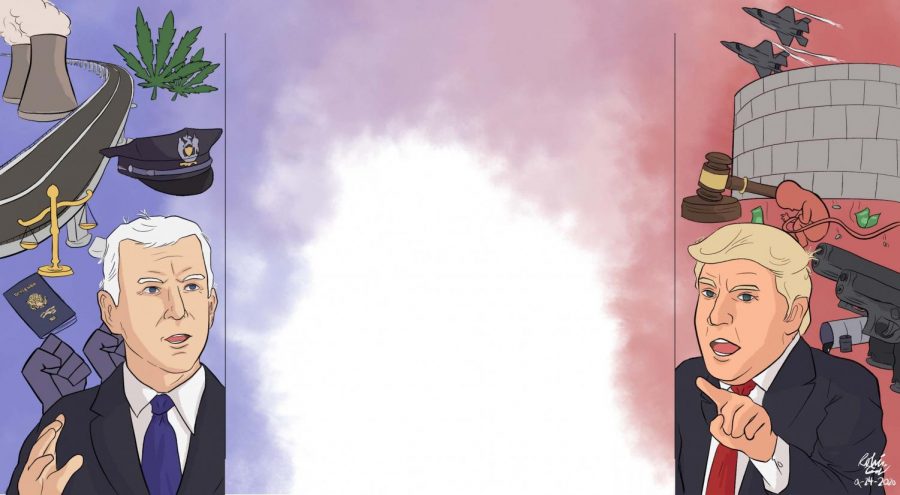 This cartoon outlines the presidential candidates' stances on pressing political issues. The Commission on Presidential Debates decided the first debate will take place Sept. 29, 2020, and it will be moderated by Chris Wallace from Fox News Sunday.

The Presidential debates are scheduled to take place on Sept. 29 and Oct. 15, 22 despite a request by the Trump campaign to change the moderators and dates of the debates to take into account early voting, which the Presidential Debate Commission rejected Aug. 6.

Many recent studies, however, question whether debates even make an impact on voters, suggesting the Trump campaign should not worry about the significance of them.
“I think they should move the debates earlier because people should be informed on the candidate’s views before the election,” junior Greg Kosmowski said.
Eight million Americans will have started voting by Sept. 16. The letter characterized those who would vote before the debates as “disenfranchised.”
Research suggests that debates are not as important in swaying voters as some people believe.
Despite the large viewership that debates attract, voters say they find debates useful but not “determinative” for selecting a candidate in an election, according to Pew Research Center.
“I will have made up my mind before then,” history teacher Bruno Vetter said about deciding which candidate to vote for before watching the debate.
Each of the 2016 presidential debates between candidates Donald Trump and Hillary Clinton had a mean of 74 million Americans, but only about 10% of voters said they were swayed.
“I think the debates will be important, as several swing states don’t send mail ballots until after the first debate,” senior Vincent Behnke said, “and polling consistently shows that undecided voters say the debates will be a big factor in their decision making.”
Many voters, however, do not remain undecided as late in the election as the debates. Nearly 70% of Americans said they made up their minds before or just after the party conventions in 2016, according to Pew Research Center.
“If you have been paying almost no attention to politics, then the debates might be meaningful,” Vetter said. “I haven’t seen a debate format that really gives people enough time to go over the issues in any important detail.”
Seven in 10 Americans are “politically active,” according to Pew Research Center.
While being “politically active” does not necessarily mean someone is up-to-date with the political landscape, it does include generally showing support for a specific presidential candidate or political party.
“Absolutely,” senior Monty Buesnel said when asked if he will watch the debates. “Generally, I am pretty dead set on one candidate. A big part of my decision to watch it is for entertainment, but I want to hear if anything changes, too.”