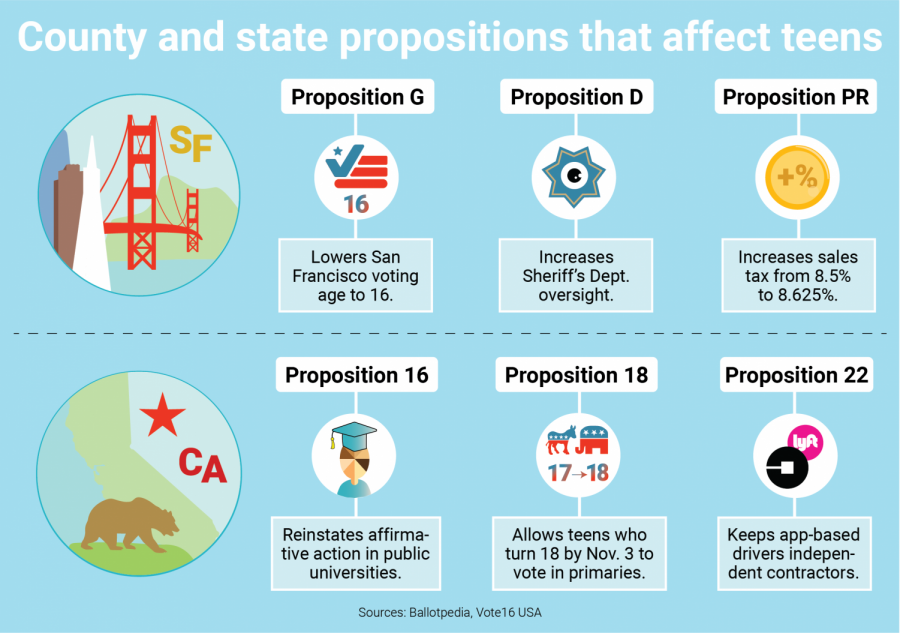 This graphic describes six county and state propositions that affect adolescents. Convent alumna Arianna Nassiri spearheaded the movement to get Proposition G, also known as Vote16 San Francisco, on the ballot this year.

Vote16 San Francisco, also known as Proposition G, could allow teens to vote in city elections if it passes on Nov. 3.

“The legislative ask of the piece is essentially to lower the municipal voting age so that 16 and 17-year-old San Francisco citizens can participate in local elections,” Vote16 SF Director Arianna Nassiri (CSH ’20) said.  “They’d be able to vote on local propositions that appear on our ballots every election.”

The San Francisco Youth Commission, a student board that advises The Board of Supervisors on issues related to young people, proposed Vote16 to address the needs of the city’s youth population.

Drafters of the proposition say they are often asked about the significance of the age 16.

“The idea of 16 is that there’s a balance between allowing for as close to universal representation as possible and making sure that all of the enfranchised members of our electorate are civically mature and politically educated,” Nassiri said. “The age of 16 is usually when young people start driving and stepping into those employed positions where they can receive enough money to be taxed.”

Some seniors say 16-year-olds should be allowed to vote.

“It’s a great idea,” senior David Tobin, who is eligible to vote this year, said. “The younger generation has a lot of good ideas. Even though they aren’t legal adults who’ll participate in a lot of the lawmaking, they’re ensuring their own success and the success of the county.”

Research conducted by Rutgers University affirms that 16-year-olds should be allowed to vote.

“Analyses of national survey data demonstrate that by 16 years of age — but not before — American adolescents manifest levels of development in each quality of citizenship that are approximately the same as those apparent in young American adults who are allowed to vote,” the study reads.

Others disagree, saying that 16-year-olds are still too young to vote.

“I feel like maybe that’s a little bit of a stretch,” senior Elijay Yturri Sigal said, “because when you’re 16, you understand things well, but you’re still not completely mature. Why give someone that much power when they’re that young?”

Young people are not ready to vote, according to a study conducted by Oxford and Warwick.

“Drawing on empirical data collected in nationally representative surveys, we argue that the weight of such evidence suggests that young people are, to a significant degree, politically less mature than older people, and that the voting age should not be lowered to sixteen,” the study reads.

Vote16 earned 48% of the vote in the 2016 election, and Nassiri says she is hopeful the proposition passes this time.