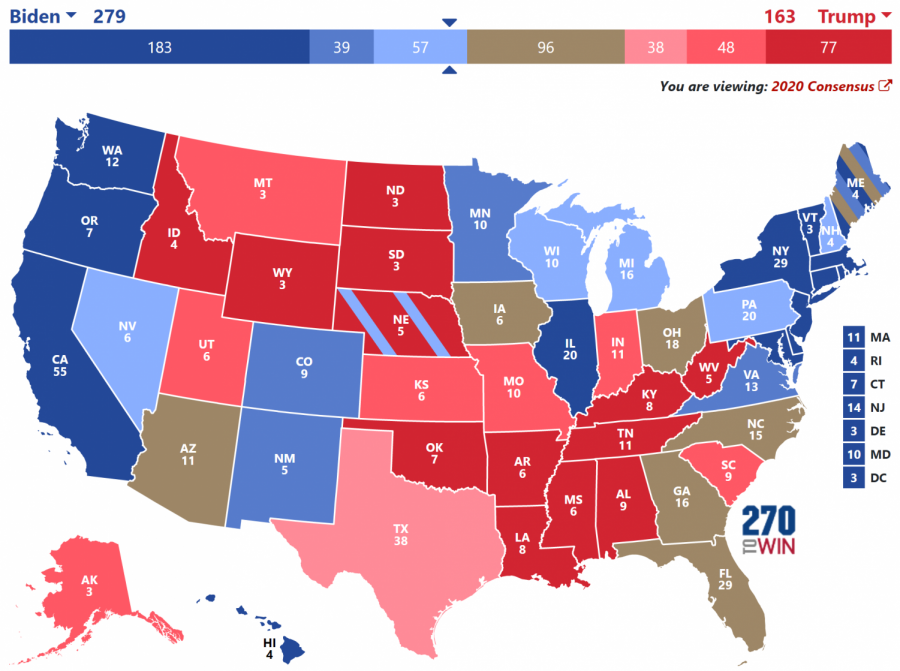 Click the map to create your own at 270toWin.com

This map shows a combination of nine predictions for the results of the 2020 presidential election. Over 100 million citizens cast their ballots early, according to the United States Elections Project.

Even though polls across the continental United States have closed, the country may not have a clear winner for the presidency tonight, as mail-in ballots, which require more extensive authentication and take longer to process, have delayed results.

The percentage of voters who mailed in their ballot this year increased due to concerns about in-person voting regarding the COVID-19 pandemic, according to Pew Research Center.

Of registered voters polled, 51% of Biden supporters and 25% of Trump supporters said they mailed in a ballot, according to Pew Research.

States determine rules regarding the tabulation of mail-in voting, with California allowing mail-in ballots postmarked by Nov. 3 to be received 17 days after the general election or delivered to a polling place before 8 p.m on Nov. 3, according to the Secretary of State.

Swing states like Pennsylvania, which do not consistently vote for the Democratic or Republican candidate, started counting ballots at 7 a.m. on Nov. 3 and may not finish counting mail-in votes until Friday, according to polling site 538.

Other states, like Florida and Arizona, allowed officials to begin processing mail-in ballots before Election Day.

A candidate must win a majority of 270 out of 538 electoral votes in order to become president, and results will not be known immediately because neither candidate is leading by a significant margin.