Social-fiber, unity of our nation must be restored 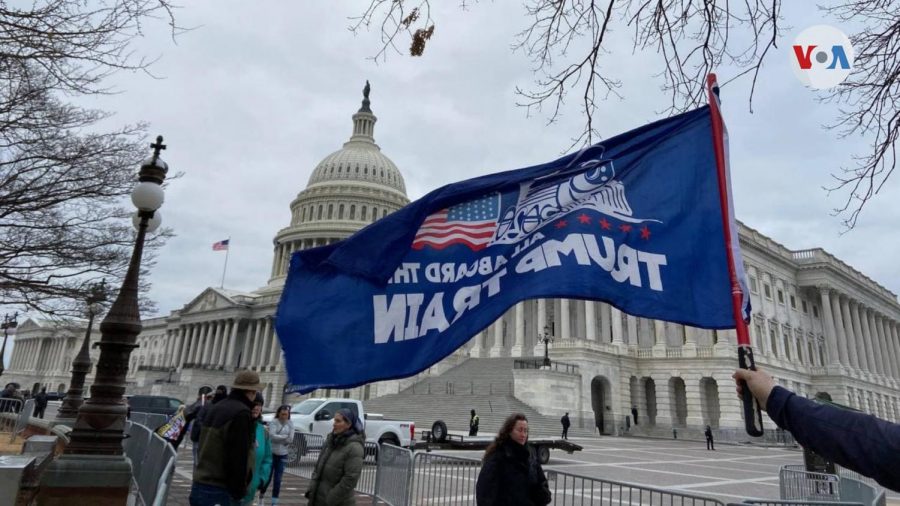 A protester holds a pro-Trump flag across from the U.S. Capitol Building prior to the beginning of the riot on Jan. 6, 2021. Pro-Trump extremists, some of whom were armed, breached the building, resulting in 52 arrests and at least 56 police officer injuries.

While humans are unparalleled by other species in their ability to utilize logic, recent events such as the riot on Capitol Hill demonstrate a concerning and dangerous trend in American politics: the replacement of logic with emotion.

Thousands of self-proclaimed “patriots,” misled by President Donald Trump’s accusations of voter fraud in the 2020 Presidential Election, forced their way through the Capitol guard and into the building on Jan. 6.

“We’re storming the Capitol,” Elizabeth, a Trump supporter who came from Knoxville, Tennessee for the riots, said in a viral video taken outside of the Capitol building. “It’s a revolution.”

Elizabeth’s outrage concerning the 2020 Presidential Election is largely popular among Trump’s base.  Seventy percent of Republicans say they do not believe the vote was “free and fair,” according to Politico.

“There’s never been a time where they could take it away from all of us, from me, from you, from our country,” Trump said in a video discouraging the mob amid the riot, which was posted on social media and has since been deleted. “This was a fraudulent election. We have to have peace so go home.”

Behind the guise of encouraging “peace,” Trump’s speech accomplished virtually nothing except confirming the reasons for which his supporters were rioting.

Trump’s attempts were in vain — something he surely knew before he even spoke because these people do not care for peace but about the alleged “fraud” — a phenomenon he repeatedly asserted in his remarks.

Little to no evidence has been uncovered of the widespread voter fraud, despite the fervor of Trump and his supporters, according to the Associated Press.

“To date, we have not seen fraud on a scale that could have affected a different outcome in the election,” Attorney General William Barr said.

Trump supporters are so adamant about election fraud because they are willing to overlook evidence of the contrary due to the president’s charisma.

“The charismatic leadership style relies on the charm and persuasiveness of the leader,” according to St. Thomas University. “Charismatic leaders are driven by their convictions and commitment to their cause.”

Trump, known for his dramatized recounts of the Democratic Party’s alleged shortcomings, his witty characterizations of his opponents, and his unwavering confidence — sometimes to a fault — in all decisions he makes, is an archetypal charismatic leader.

“Many scientists have identified this higher-order, rational, slow-working part of the brain, which is basically the prefrontal cortex, and the more primitive parts of the brain that work faster or more automatically, and subserve emotions like fear,” Jack M. Gorman, a psychiatrist and CEO of Franklin Behavioral Health Consultants, said about Trump in an interview for “The Atlantic”.

“There are good data showing that the first thing that people hear makes the biggest impression — and that if it’s heard under emotional circumstances, that it’s always associated with that emotion,” Gorman said. “The point is, those fears that these charismatic leaders arouse are often committed to permanent indelible memory, and they become extremely hard to dislodge, and they are easy to evoke simply by making people scared again.”

Through the sensationalist “fear” that Trump inspires within his supporters, he creates an emotional bond which extends beyond the surface-level ideological adherence for which many people support politicians, allowing him to call upon this fear and inspire loyalty within his followers as he did in his speech — resulting in their blind devotion supporting his delusional cause.

While many still pushed to further the decertification of the Electoral Votes for some states, many Senate Republicans, including Republican majority leader Mitch McConnell, opposed the illogicality of Trump’s ardent followers.

“The voters, the courts, and the states have all spoken,” McConnell said in a speech to Congress during a Senate hearing about overturning Electoral Votes on Jan. 6. “If we overrule them all, it would damage our republic forever. It would be unfair and wrong to disenfranchise American voters and overrule the courts and the states on this thin basis.”

Regardless of their political affiliations, these insurrectionists were not representative of either political party. They were citizens caught in a fever dream who acted without concern for the democratic principles of their country, contradicting the very moral fiber on which the United States democracy stands.

Ultimately, it is wrong to blame a single party for what happened on Jan. 6. The country must recognize that the riots both at Capitol Hill as well as other recent instances of civil unrest result from the constant nitpicking and political gridlock existing within Congress and between citizens every day.

“We cannot keep drifting apart into two separate tribes with separate facts and separate realities,” McConnell said, speaking out about the state of the country.

Yesterday’s riot should be a wake-up call for everyone. The division within our country must end. This is not the time to pick sides or tally points, because neither party is truly without blame. It is a time to unite Democrats, Republicans, and all others alike, with reason and logic at our sides, against the delusions of Trump.