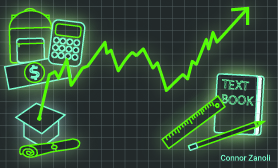 Young entrepreneurs who have invested in the stock market are helping spread financial literacy, encouraging their fellow students to follow their lead.

“I first started investing in the stock market when I was in the fifth grade,” senior Alex Di Napoli said. “I grew up in a household where most of my family members dealt with finance, so I was inspired by them.”

Di Napoli is a member of the Stuart Hall High School Finance Club. Another group of students, which includes junior William White, has started a separate finance club. Members of both groups say they seek to increase financial literacy among the student body.

White said he began investing because he was afraid his savings were losing value due to inflation — where the printing of money lowers the value of the dollar in consumer markets as it naturally becomes more prevalent.

Many young people, however, have found investing “scary,” according to recent studies. Sixty-three percent of people do not invest until older than the age of 35 years old, according to a Gallup Poll.

“I think it’s a great exercise with a family member or friends, so someone that knows the investment landscape,” David Lyon, Chief Investment Officer at J.P. Morgan Chase said about how students should begin investing. “Really the best way is to learn by experience by getting  practice and following different investments in different
companies.”

The recent GameStop short squeeze has spurred teens to invest, according to the Washington Post, where a large number of investors drove up the price of GameStop stock from $17.25 to $347.51 in January.

“What happened with Game-Stop was honestly awesome,” White said. “Seeing the internet even the playing field between retail investors and market makers and big hedge funds is great.”

Lyon, however, cautions against students adopting investing practices from Reddit, the platform that independent investors used to plan the GameStop short squeeze.

“I wouldn’t call that investing,” Lyon said. “I call that gambling. Be very careful when you’re investing in themes and momentum types of investments driven by the internet. You can lose money very quickly.”

White agreed, saying that students who made money on GameStop stock should take it as a win and move on, adopting different investment strategies.

“What will be interesting to see is if these new investors do their due diligence and don’t just continue to hop on the bandwagon stocks,” White said. “Don’t be the person that bought GameStop at three hundred try to catch onto these things early if that’s the route you go.”

“As the saying goes, ‘Investing isn’t scary, not investing is,’” White said. “Every student should be investing their money in the stock market. Just don’t be what the finance world calls “dumb money” and be smart about your choices.”