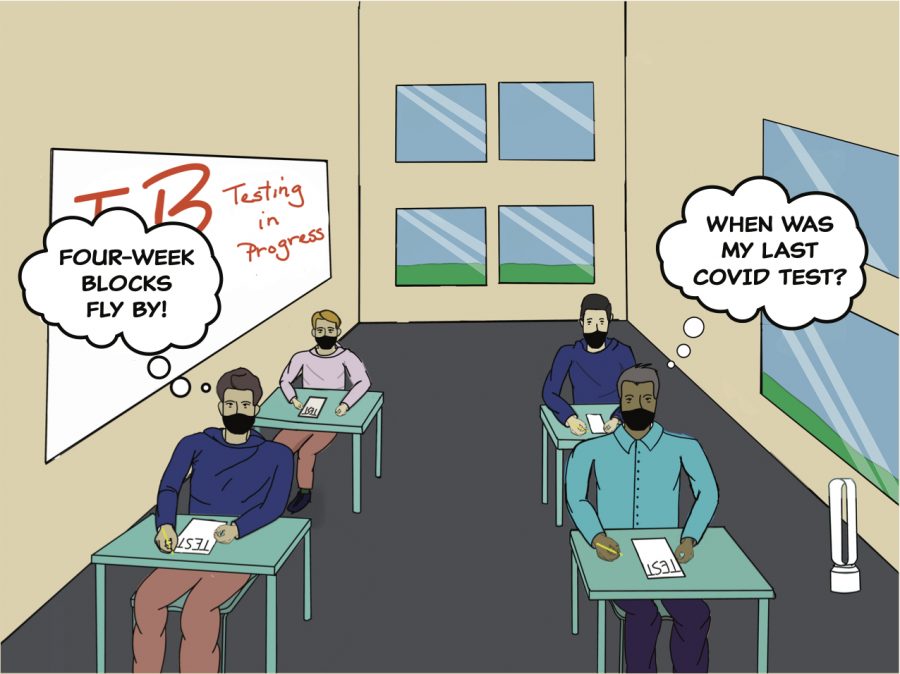 Convent & Stuart Hall should not mandate IB testing this year. The unconventional schedule due to the pandemic encouraged cramming and prevented students from effectively learning course information.

Seniors enrolled in the International Baccalaureate Diploma Program should not be forced to take IB assessments this May because of an unconventional schedule.

As a result, students have to spend an intensive four to five-week period focused on two subject areas, rotating to two more courses a total of four times over a semester.

While this unconventional schedule is a good compromise given the global pandemic, it will undoubtedly have consequences on students’ ability to retain information in the long term, ultimately affecting their performance on IB assessments.

The main problem with this schedule is that effective learning requires time.

“Our ability to remember a piece of information depends critically on the number of times we have reviewed it, the temporal distribution of the reviews, and the time elapsed since the last review,” a study by the Proceedings of the National Academy of Sciences reads.

In past years, students experienced such spaced repetition due to classes that lasted 70 minutes and met two to three times per week.

Now, with two and a half hour classes, students cover a week’s worth of material daily, negating students’ abilities to prepare ahead. As a result, students must often study a breadth of material the night before a test, a method of studying known as cramming.

“While previous lab studies comparing cramming vs. spaced repetitions sometimes found a benefit of cramming on immediate tests,” Sean Kang, a postdoctoral fellow at University of California, San Diego, wrote, “these short-term gains were invariably reversed when the test was administered after a longer delay — i.e., cramming leads to rapid forgetting.”

This delay, however, is longer than the customary hour or day that a test can be delayed, given the schedule. For many IB students, finishing a class means that they will not revisit its material for five or more months.

These long breaks from subject areas will skew student’s actual results on IB assessments, causing their scores to deviate from teacher-predicted grades.

The caveat to predicted grades is that “the IB takes measures to work with schools that consistently under- or over-predict student grades,” according to the IB.

In addition to impacting students’ scores, forcing students to take IB assessments with the current schedule could negatively impact the school’s credibility with the IB.

It is ultimately both unfair and imprudent for the school to force students to take IB exams given the current schedule, which contradicts the in-depth educational method that the IB requires.