Journalism educator to retire after 25 years at schools 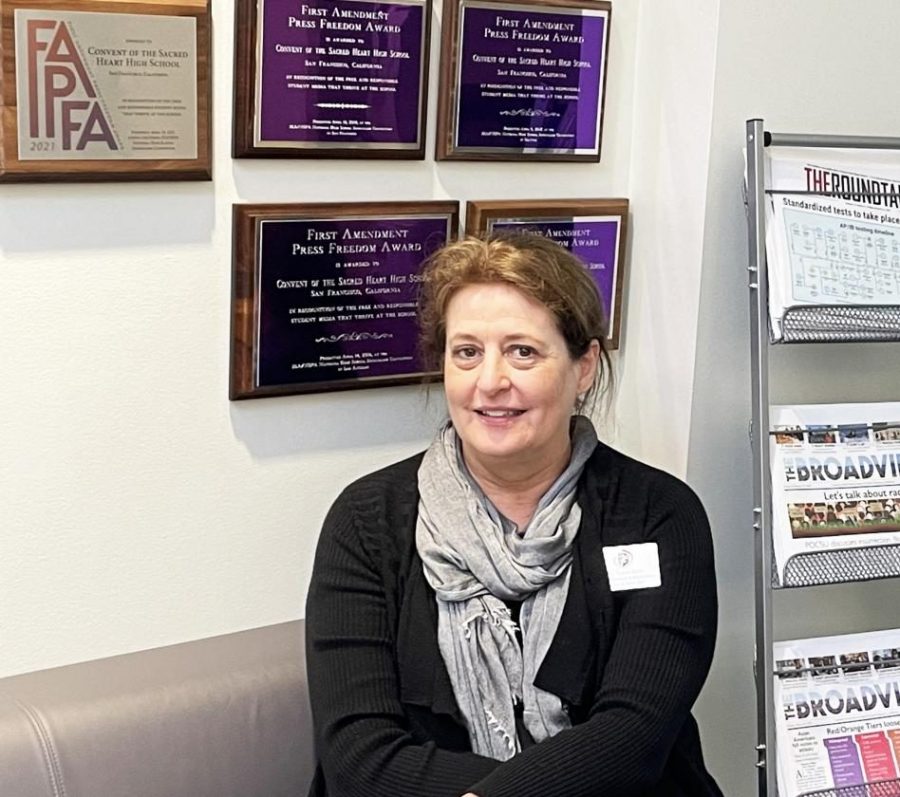 Tracy Sena, Scholastic Journalism & Media Director, sits in front of the Publications Lab with seven years of First Amendment Press Freedom Awards behind her. Sena facilitated a journalism program in which student work has been nationally recognized for its excellence.

Students who arrived at school in the early morning could usually spot Scholastic Journalism & Media Director Tracy Sena working in the Publications Lab on the Third Floor of the Siboni Center.
Beginning next school year, however, the school community will be missing Sena, who is retiring, and remembering how her mentorship helped students improve as writers while producing high quality journalistic work that has won many local and national awards.
“I believe that I was called to be a teacher,” Sena said when reflecting on her career and pedagogical practices. “It’s a vocation. You look at what is the best way to help teach students to understand, and by understanding, to dig deeper and take their work to a higher level.”
Sena originally ran the computer lab at Convent High School while helping start a student newspaper at the school’s request. She soon began attending national journalism conventions with her students.
“We took four students that first year, and the one thing that became obvious is these newspapers that were winning the awards were 100 times better than we were,” Sena said. “We continued to go to national journalism conferences, and eventually I got certified as a journalism educator and really sunk myself into the craft of high school newspapers.”
Convent Head of School Rachel Simpson started working at Schools of the Sacred Heart San Francisco in 1996 ­— at the same time as Sena — and says she is grateful for Sena’s contributions to students.
“With the decades of student publications that belong in our archives and the development of students as excellent writers and thinkers to such a degree that many have gone on to pursue professional careers in journalism, she has emboldened students to believe even more deeply in themselves and what they’re capable of,” Simpson said.

Although Sena began her journalism education career as adviser of “The Broadview,” Convent High School’s student publication, she also took over The Roundtable in 2016.“One of the big surprises was seeing how differently a newspaper staff of boys and a newspaper staff of girls relate to each other in a group.” Sena said. “If you look at the stories which the boys cover and the girls cover, you’re going to see their different biases simply because they’re coming from different perspectives, and that’s been really exciting.”
Owen Murray (’20), former editor-in-chief of The Roundtable, studied under Sena’s mentorship and says she helped foster his writing skills, academic interests and ability to express himself freely.
“When I heard she was retiring, the first thing I thought about was how her career at Convent & Stuart Hall touched so many students and
positively influenced them at extremely formative times in their lives,” Murray said. “She always fought for the rights of students to write and investigate independently from the school
administration.”
Head of School Tony Farrell says Sena has been instrumental in amplifying student voices during her five years advising the Stuart Hall student newspaper, especially during the COVID-19 pandemic.
“This has been such an unusual time in terms of the way that people receive news,” Farrell said. “It’s been incredibly valuable to have Ms. Sena helping our students to understand what journalism actually is, and then to facilitate our students creating a document that orients them into what journalism should be.”
Although Sena spends most of her time at school working in the Publications Lab, she says her work does not end when she leaves campus.
“I don’t ever really leave the Pub Lab,” Sena said. “I bring it home with me. One of the things about seeing teaching as a vocation is that I’ve made sacrifices in my personal life for the good of my students.”
Sena says she will take the principles of the Sacred Heart community with her into the next chapter of her life.
“I am really proud to have been a Sacred Heart educator for 25 years,” Sena said. “Sacred Heart schools know what they are about. I’ll take those values with me in whatever I decide to do. They may actually form what I decide to do in this next
chapter.”