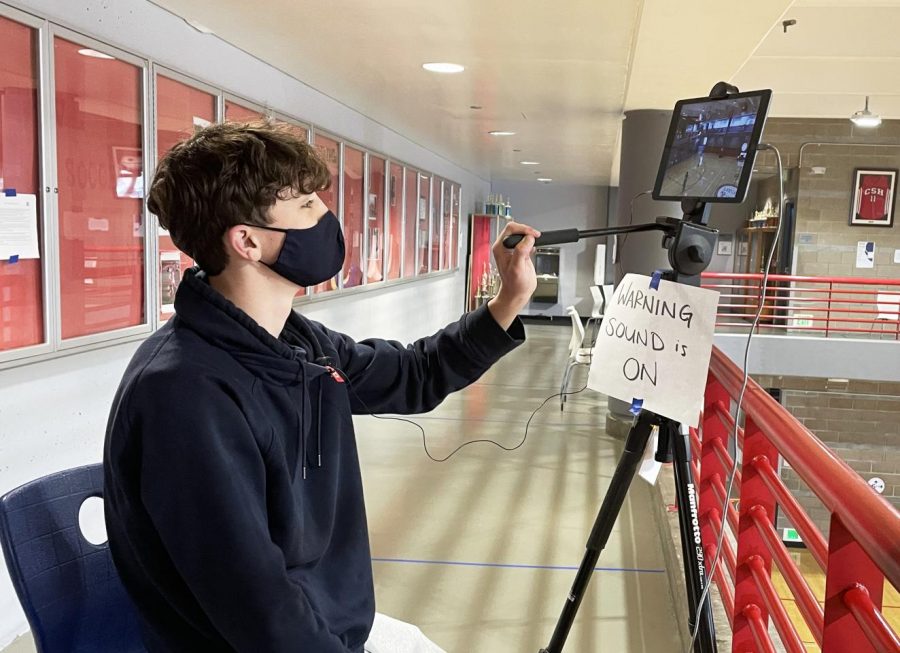 Junior Isaiah Ryan tests an iPad camera and microphone prior to a Knights basketball frosh-soph game against Urban High School in the Herbert Center on May 7, 2021. The Zoom livestream included real-time commentary.

A group of juniors is livestreaming school sports games while in-person fan attendance is prohibited at indoor high school sporting events during the pandemic except for team members’ families.
The Broadcasting Club is using Zoom and YouTube Live to stream home games.
“We’re broadcasting both boys and girls basketball, as well as girls volleyball,” Isaiah Ryan, one of the Broadcasting Club leaders, said.
The club has built setups consisting of an iPad, tripod and microphone on the mezzanines of both the Broadway Herbert Center and the Pine/Octavia Dungeon and divides tasks among its members to allow for multiple streams during games.
“I do all the behind-the-scenes tech stuff,” junior Bo Darwin said. “I set up the camera, get the YouTube Live going, get the microphone set up, mute it, unmute it, focus the video on the court, anything tech-related.”
Club members say they are providing commentary on varsity games to improve the audience experience.
“It was pretty hard to commentate when we played against Marin Academy because I didn’t know any of their players’ names,” junior Zeke Noveshen said. “In the future, we hope to get full rosters so as to make our commentating sound more professional.”
While there is still uncertainty regarding when fans can return to in-person events, club members say their main goal is to ensure that streams are available to everyone.
“My favorite part is letting the community get to see the games,” Noveshen said. “Nobody loves watching Stuart Hall basketball live more than me, and it’s rewarding to watch the game and support the crew while also letting the whole school watch.”
Although the club’s revival is in response to COVID-19 regulations, club leaders say they plan to continue broadcasting for the foreseeable future.
“It had already existed for boys basketball before the pandemic,” Ryan said about broadcasting in previous years. “Next year, we as a group plan on continuing it, especially because it’ll be easier given the chance we wouldn’t have to deal with COVID-19 restrictions.”
While the group currently consists completely of juniors, Ryan and Noveshen say they hope to bring underclassmen on board to continue their work next year.
“I am specifically interested in basketball but also broadcasting itself,“ Ryan said. “It’s an interesting way of not just learning about broadcasting but actually being a part of the process, and to give sports a wider reach to our community.”